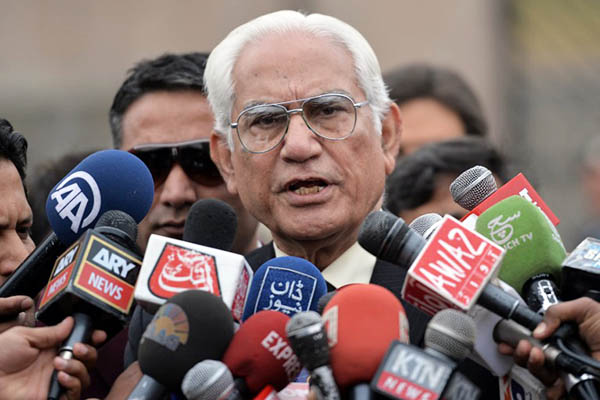 Lawyers representing former president Pervez Musharraf in a landmark treason case said on Wednesday they had been threatened with beheading and called for a new venue for the trial.

They also urged the court to allow Musharraf, who last month became the first former Army chief to appear in court for treason, to go abroad for medical treatment. The case relates to his 2007 imposition of emergency rule and is seen as a key test of civilian authority over the country’s powerful Army.

Lawyer Ahmad Raza Kasuri said the defense team wanted the trial shifted to another location and feared for its safety, after a gun and suicide attack on a lower court complex in Islamabad on Monday left 11 dead. “We cannot go ahead with this case in these conditions,” he said, before reading aloud from a threatening letter he said the team had received.

The handwritten letter stated: “Dear Sirs, we request that the three of you stop representing Musharraf otherwise we will destroy your children and behead all of you.” Describing Musharraf as “either a Jew or Christian,” it concludes: “He earned billions of dollars and became the richest person in the world. Why did he need to return to Pakistan? He must be hanged. He is an infidel, hypocrite, and you should stop representing him or be prepared for war.”

It was signed by the “people of South and North Waziristan” but its authenticity could not be verified.

Musharraf, who ruled Pakistan from 1999 to 2008, is reviled by Islamist militants for joining the U.S.-led “war on terror” and survived two assassination attempts by them. His lawyers also submitted a written application in which Musharraf stated: “It is requested that I may be allowed to travel abroad for my own treatment as also to attend to my seriously ailing mother.”

Musharraf was diagnosed with triple-vessel coronary artery disease by military doctors in January. His mother, who resides in Dubai is 94 and is said to be suffering from a number of serious ailments. Similar requests by Musharraf’s lawyers in the past have been denied.

The special court, which has three judges and is presided over by Justice Faisal Arab, did not rule on either matter and will resume hearing the case on Friday.

Musharraf has endured a torrid time since returning to Pakistan in March last year on an ill-fated mission to run in the general elections. Almost as soon as he landed he was barred from contesting the vote and hit with a barrage of legal cases dating back to his rule.

These are just delaying tactics of the lawyers These are baseless allegations. Threat is present every where.. Does Mr. Kasuri thinks that his client is safe in AFCI hospital . These Taliban have bombed the GHQ< Naval Bases and Mehran Air Base too. They can inflitrate any where .

There is no threat to Kasuri or Rana Ejaz from Talibans. They infact pose threat to themselves by their own antics. The letter is not authentic. And it does mot disclose any valid reason to threat them.

It is just lawyering gimmicks to delay the matter, and save their client from under going the trial, which is bound to find him guilty of treason / There is no other way out of this trial, He is traped in the legal battle of hos life.