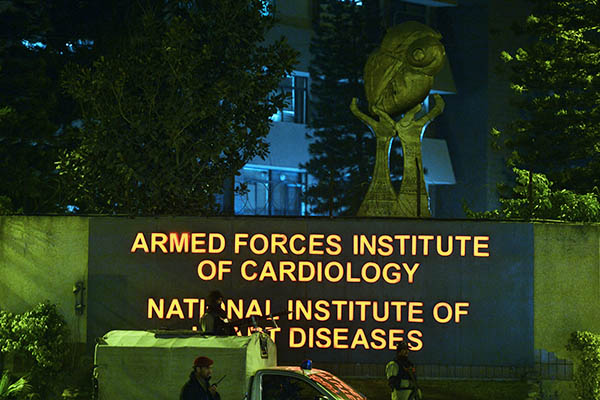 Pakistan’s home ministry says it has not removed former president’s name from ECL following his admission to hospital for heart problems.

The home ministry on Saturday said it would not immediately lift a travel ban on former president Pervez Musharraf, who suffered a heart problem on the way to his treason trial earlier this week.

The 70-year-old former ruler was taken ill and rushed to a military hospital on Thursday as he was being transported under heavy guard to hear treason charges against him at a special tribunal in Islamabad. The former Army chief spent his third day under observation at the Armed Forces Institute of Cardiology in Rawalpindi on Saturday. His lawyer Ahmed Raza Kasuri said doctors were monitoring his condition in the intensive care unit.

The sudden health scare was met with skepticism from some observers and feverish media speculation that his departure from Pakistan on medical grounds could be imminent. But Musharaf’s name has been put on an official “Exit Control List” (ECL) to bar him from traveling abroad, and the Sindh High Court ruled last month against lifting the ban.

“There is no intention to allow him overseas travel at the moment,” said a senior official of the Ministry of Interior. He also denied reports that Musharraf’s wife Sehba has filed an application with the ministry seeking to lift the ban. “No fresh application has been filed by Madam Sehba, and it is clear that the travel ban on Musharraf is not being lifted. He won’t be allowed to travel abroad immediately,” the official said.

Musharraf’s lawyer Kasuri said earlier on Saturday that doctors have sent his medical reports to experts in Britain, who will determine his further treatment. “The reports of the medical tests of General (retired) Musharraf have been sent to the experts for further examination in the U.K.,” said Kasuri. “The decision about his further treatment to be carried out in Pakistan or abroad will be taken in the light of the British experts’ opinion,” he added. “Of course they (the Pakistan doctors) will give him excellent treatment. He is a former president of Pakistan and Army chief. He is a high profile personality,” Kasuri said.

Aside from the treason allegations, Musharraf also faces trial over the assassination of former prime minister Benazir Bhutto, the death of a rebel leader, a raid on the Lal Masjid and the detention of judges.