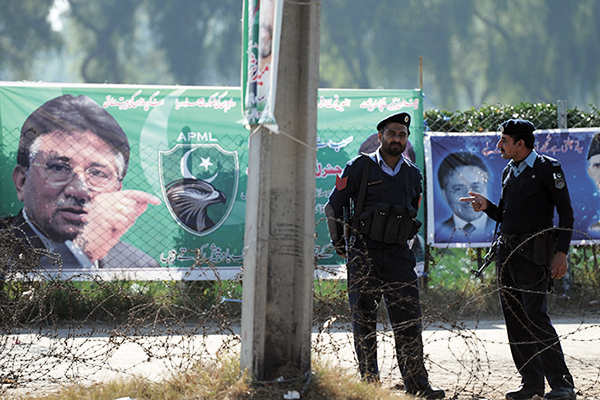 Former president Pervez Musharraf’s treason trial on Tuesday was adjourned over security fears after explosives were found near the road he was to take to court.

The 70-year-old had been expected to appear in person before a specially convened court in Islamabad after legal efforts to have the tribunal ruled invalid failed. As the court was preparing for Tuesday’s preliminary hearing in the case, relating to the imposition of emergency rule in November 2007, police said they found five kilograms of explosive material along with a detonator and two pistols close to the route Musharraf was due to take from his house to the court.

Muhammad Asjad, the police chief for Chak Shahzad, the Islamabad suburb where Musharraf lives, said the material had not been assembled into a bomb.

After the discovery, Musharraf’s lawyer Anwar Mansoor Khan told the court that the former general would not be able to attend because of serious security threats to his life. Justice Faisal Arab, heading the three-member bench, then adjourned the hearing to Jan. 1 when Musharraf is again expected to appear in person.

State prosecutor Naseer-ud-din Khan Nayyar said that the charges against Musharraf would be read out to him at the next hearing. The court will also consider two petitions filed by Musharraf’s 10-strong legal team challenging the authority of the special court and objecting to the appointment of the prosecutor.

Since returning from self-imposed exile in March to run in the May general elections, Musharraf has faced a range of serious criminal cases dating back to his 1999-2008 rule. These include murder charges over the assassination in late 2007 of former prime minister Benazir Bhutto, as well as the death of rebel leader Akbar Bugti, a deadly military raid on the Lal Masjid, and the detention of judges.

On Monday, the Sindh High Court said it was unable to grant an application by Musharraf to have a travel ban lifted so he could visit his sick mother in Dubai, saying only the government could make the order.