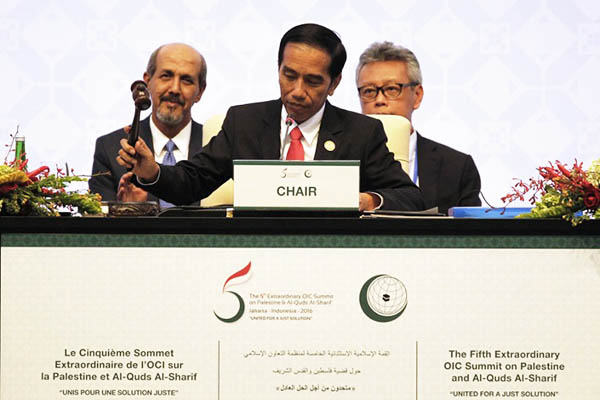 Organization of Islamic Cooperation wants to remove from market anything produced in illegal Israeli settlements.

A global Muslim body called Monday for a ban on products from Israeli settlements in the occupied territories and pledged full support for the “inalienable rights” of the Palestinians.

The call came at the end of an Organization of Islamic Cooperation (OIC) summit in Indonesia, the world’s most populous Muslim-majority country, which brought together representatives from 57 states.

An OIC resolution urged “member states and the wider international community to ban products produced in or by illegal Israeli settlements from their markets.”

However, the move was not binding on member states.

Settlements refer to Jewish communities built in areas occupied by Israel since 1967. Such settlements are illegal under international law and major stumbling blocks to peace efforts, with those in the West Bank and East Jerusalem built on land that Palestinians see as part of their future state. The issue of goods imported from settlements has caused tensions with Israel in the past.

Israeli Prime Minister Benjamin Netanyahu in November suspended diplomatic contacts with the European Union about the Middle East peace process—which has been stalled for almost two years—over the bloc’s decision to label imported produce from the settlements as such rather than “Made in Israel.” The suspension was ended last month when Netanyahu held talks with the E.U.’s foreign policy chief.

At the end of Monday’s summit, the OIC also pledged “full support to the political, diplomatic and legal efforts” to ensure the Palestinians achieved their “inalienable rights.”

The Jakarta meeting was attended by leaders including Palestinian President Mahmud Abbas and Sudanese President Omar al-Bashir, who is wanted for alleged war crimes by the International Criminal Court. It came amid a five-month wave of violence in Israel and the Palestinian territories that has killed 181 Palestinians as well as 28 Israelis.

Israeli-Palestinian peace talks collapsed in April 2014 and since then the situation has deteriorated, with the prospect of fresh dialogue appearing more remote than ever.