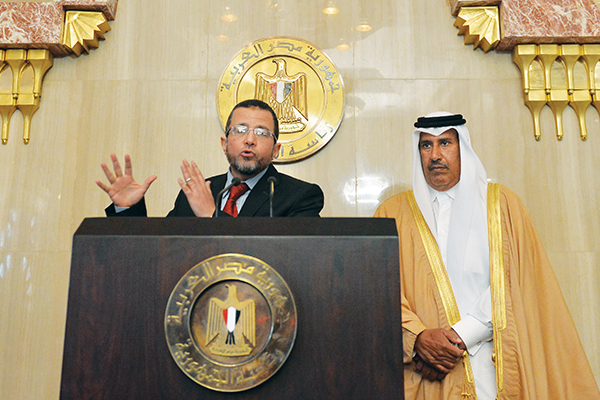 [dropcap]E[/dropcap]gypt’s economy is in sharp decline. In Washington, these dire economic straits have added new weight to a practice long favored by politicians looking to pressure the Egyptian government: the threat to cut off aid. Egypt receives more than $1 billion annually from the U.S., and amid concerns on Capitol Hill over President Mohamed Morsi’s commitment to democracy, legislators have pressed the Obama administration to freeze the funds. Last month, U.S. Secretary of State John Kerry made headlines when he announced America would give an additional $250 million to Egypt, citing its “extreme needs.”

But America’s money has been overshadowed of late by another big-pocketed donor: tiny Qatar. A monarchy with a population just over two million and the world’s third largest natural-gas reserves, Qatar had already promised Egypt $5 billion in aid, on top of plans to invest another $18 billion over the next five years. Then, on April 10, it sent yet another lifeline, pledging to boost the struggling economy by buying up $3 billion in government bonds. (It also offered to send gas to stave off expected summer blackouts, which will give Morsi some much-needed political relief.)

The announcement of the sudden cash influx came as a shock to many Egyptians. “Qatar has effectively annexed Egypt as of this morning,” Bassem Sabry, a writer and blogger, tweeted as news of the loan broke.

Qatar is in “a different category” from America when it comes to money flowing into Egypt, says Simon Henderson, who directs the Gulf and Energy Policy Program at the Washington Institute. And America has no way to keep up. “It’s not the way the U.S. system operates, and it’s a disadvantage,” Henderson says. “The U.S. appears slow-witted on this, and the Qataris appear quick and nimble. The Qataris are buying influence. The big question is, what do they want in return?”

Qatari wealth has spread across the globe, reaching deep into countries like England and France. But over the last two years, questions over its intentions have surfaced most frequently in the Middle East. It has backed the rebellions against Muammar Gaddafi in Libya and Bashar al-Assad in Syria, and like it is doing in Egypt, it has assisted Tunisia’s new government with badly needed funds. It has even poured money into the Gaza Strip, where last October the Qatari emir, Sheikh Hamad bin Khalifa Al-Thani, became the first head of state to visit since 2007, when Hamas took control.

Qatar is often accused of supporting Islamists abroad, including the Muslim Brotherhood, the powerful group that backs Morsi. The motivation may be ideological, Henderson says, but the emir could also be looking to head off Islamist challenges to his dynasty at home. The emir’s main focus, however, seems to be simply winning influence—making Egypt a natural focus as the Arab world’s most populous country and a longtime regional heavyweight. “They’re using the situation in Egypt to upgrade their own status in Arab politics,” Henderson says. “They were a small and peripheral player, and now they want to be a main player—if not the main player.”

Michael Stephens, a Doha-based researcher with Britain’s Royal United Services Institute, says Qatar may have seen Egypt as an easy investment after Morsi became its first democratically elected president in June. But as Egypt’s political situation has spiraled—and its economy along with it—the emir is facing some blowback at home. “It’s a lot of money, but it’s nowhere near enough to solve Egypt’s problems,” Stephens says. “Public opinion here is simply to cut the bastards loose and watch them free-fall. This won’t change the policy much, but it’s going to hurt the [government].”

Many Egyptians opposed to Morsi’s government, meanwhile, have expressed anger over the Qatari support. And Paul Sullivan, a Middle East specialist at the National Defense University in Washington, D.C., says Qatar’s deepening involvement in Egypt may also bring questions from allies like America and Saudi Arabia, which spent years as the region’s main distributor of financial largesse. “Many are wondering what the Qatari game really is,” he says.