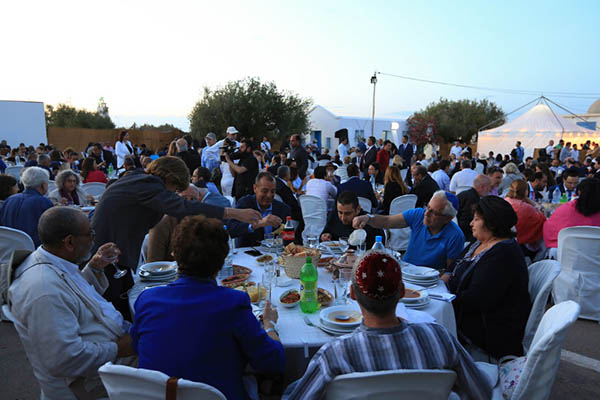 Muslims attend an iftar organized by Jews at the Ghriba Synagogue. Fathi Nasri—AFP

Afef Ben Yedder delicately placed an egg inscribed with wishes in a cavity in Africa’s oldest synagogue in southern Tunisia, hoping they will be granted even though she is a Muslim. Five years ago, she said, her prayers were answered after visiting the Ghriba synagogue on the Mediterranean island of Djerba, where Jews go to ask a mysterious saint to grant their wishes.

“I prayed for a friend who had difficulty having children and now he has a three-year-old boy, and for something else I don’t want to mention, and it has come true,” she said with a big smile.

This time Ben Yedder returned with her Jewish childhood friend Karen who moved to France as a teenager, after they were reunited on Facebook. It is a chance to pray together and reminisce about their times spent together in a district of Tunis where they grew up living alongside Jewish, Christian and Muslim neighbors.

This year’s annual pilgrimage to the Ghriba synagogue coincides with the Muslim holy month of Ramzan for the first time since 1987. Muslim and Jewish leaders shared a fast-breaking meal on Wednesday evening on the island, a symbol of cohabitation that Tunisia is keen to promote.

The number of Jews in Tunisia has fallen significantly, from around 100,000 before independence from France in 1956 to an estimated 1,500 today, most of whom live in Djerba.

Ben Yedder is not the only Muslim joining thousands of Jewish pilgrims at the synagogue. “For 15 or 20 years, more and more Muslims have been participating in this pilgrimage,” said French historian Dominique Jarasse, co-author of a book on Tunisian synagogues. “For a long time, they were spectators. But there is now a form of appropriation, which is linked to the political situation—because people want to show how tolerant Tunisia is—to tourism because it is a place of heritage, and there is undeniably an act of faith on the part of these Muslims,” he told AFP. “Many are convinced that the saint really has power.”

The festival, an important tradition for Jewish Tunisians, is no ordinary act of worship.

Pilgrims revere a girl—the “Ghriba”—who is said to have been killed by lightning and whom they hope will grant their wishes—especially for fertility, marital happiness and health. “This cult of saints is quite typical of the region and Islam. Judaism has adapted,” said Jarasse.

Some pilgrims are surprised that they have to take off their shoes at the entrance of the synagogue. “We are not in a mosque,” one says, laughing.

But men and women of all religions can mingle inside. “Anyone who enters—Catholic, Muslim, or Jew—can pray here,” said Laura Touil Journo from France who visits every year. “We are not even sure which confession she is herself, this young girl,” she said, referring to the “Ghriba.”

Dionigi Albera, co-organizer of a recent exhibition on shared holy places, said this phenomenon is quite widespread. Some Jewish Tunisians venerate Sidi Mahrez, a Muslim saint of the 11th century believed to have stood up for them.

“Now it has become more complicated, less frequent, especially as hundreds of thousands of Jews have left the region,” said Albera. “The Ghriba is one of the few visible testimonies” of this phenomenon.