‘My Entire World is Gone’ 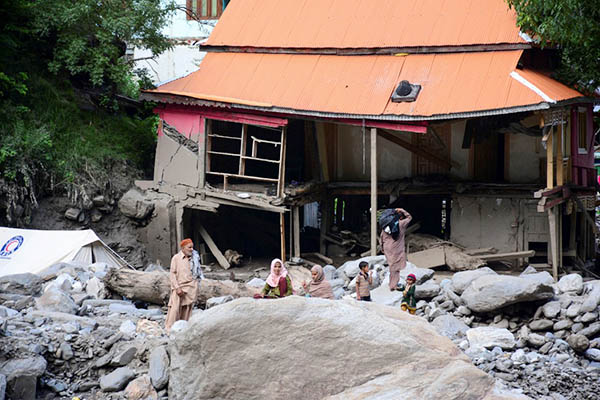 Once a small cluster of houses stood along a gentle stream in Pakistan-administered Kashmir. Now only jagged rocks and a few damaged homes remain after torrential rains wreaked havoc on the picturesque mountain village in the Laswa Valley.

More than 270 people have been killed in recent days across South Asia as monsoon rains deluged large swathes of the subcontinent, flooding waterways and destroying communities. On Sunday evening, the normally quiet stream running through the valley morphed into a raging current—uprooting everything in its path. Twenty-three people are missing, presumed dead by officials.

Seven others were injured, while 150 houses and businesses were destroyed and about 50 buildings damaged in the seven hamlets spread across Laswa.

“I was holding the hand of my mother trying to save her, but unfortunately I lost her hand and she was swept away by the floodwater,” says Amin Butt, who was visiting his family. “Within a minute my entire world was gone, my mother was gone and my home,” Butt said, his eyes misting over. “We have nothing left here now except for the stones.”

Kashmir has been divided since the end of British colonial rule in 1947 and both New Delhi and Islamabad claim the former Himalayan kingdom in full. Located just a few kilometers north of the Line of Control—the heavily militarized de-facto border dividing the disputed Himalayan territory—Laswa has been frequently shelled during bouts of fighting between Pakistan and India.

But in recent years it had been largely spared despite increasing tensions.

On Sunday, the tragedy brought by the floods reminded residents of the horrors of war from the past. Shahnawaz Butt lost his wife and three of his six children in the disaster. “I was unable to see their faces again because their bodies were not found,” he sighs. “I would like to appeal to whoever hears my voice, to provide us with the basic necessities of life like electricity and water,” he pleads.

Several residents interviewed by AFP criticized the slow response by officials, saying supplies arrived slowly by the single road that enters the valley rather than being flown in. White tents provided by the Pakistan Army now stand in place of the homes that resided there just days ago, where survivors receive condolences from their neighbors.

Raging from June to September, the monsoon is essential for irrigating crops and replenishing vital water sources across the subcontinent that approximately one-fifth of the global population depends on. But the yearly rains often turn deadly, as floods wash away communities and destroy farmland.