Home Features My Gateway to Pakistan

My Gateway to Pakistan 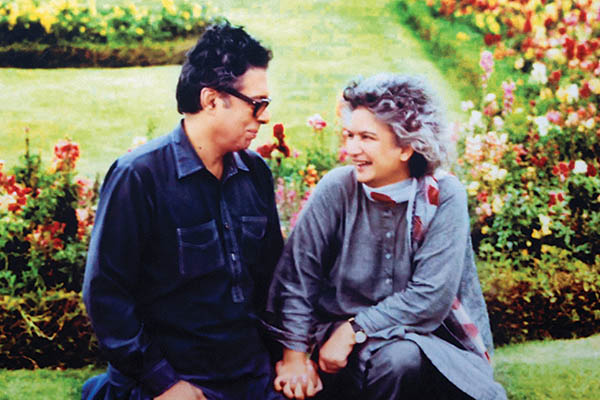 Cracking the walls that divide us

I find it difficult to use the past tense for someone like Nigar, who is more with us now than when she was confined to her mortal body. That is how I will recount my time spent with her: as someone who is physically absent, but present in every other way.

I met Nigar in January 1979 in Thailand, where I worked with the U.N. and lived with my partner, Baljit Malik, and our 3-month-old daughter, Meeto Bhasin-Malik. Baljit was doing a consultancy with the Economic and Social Commission for Asia and the Pacific, and helping to coordinate a study on poverty in Asia. Nigar was part of the team in Pakistan. She had just gotten married, and I remember the first thing she took out of her bag and placed on her bedside table in the hotel: a big photo of her partner Tariq Siddiqi, a brilliant civil servant in Pakistan. This was my first glimpse of what turned out to be one of the most loving and caring (and long lasting) relationships I have seen. I found out later that Nigar’s love was always unconditional. She did not say, “If you do this, if you think like this, I will love you.” If she liked you, she loved you and that love and friendship was forever.

A few years after that first meeting, Nigar became (still is) my Gateway to Pakistan. The first time I came to West Punjab was in 1946, when I landed on this planet in a tiny village in Gujrat district. The next time was because of Nigar. When in 1983 the Family Planning Association of Pakistan (FPAP) was looking for a trainer-consultant to help plan their women’s activities, she suggested my name. Dr. Attiya Inayatullah was the chair of FPAP at the time, Surraiya Jabeen was the head, and Fareeda Sher the women’s program coordinator. I was invited by their team for about a week. My happiness knew no bounds: it was my homecoming.

Our relationship was both personal and political. We worked together to increase cross-border contacts, friendships, and cooperation. She became an integral part of several South Asian people’s initiatives like Homenet South Asia, and came many times to India for conferences organized by the Indian Association of Women’s Studies. She participated in several U.N. Women-led regional initiatives. For many South Asian feminists, Nigar was/is one of the prominent faces of feminism in Pakistan. She was like a nursery of socialist feminist ideas leading to action. Through her reading, research, dialogues with the Women’s Action Forum (WAF) and other groups, she polished and honed ideas, developed visions and programs, and then spread them all over Pakistan through the large Aurat Foundation network that she founded. She did not allow feminist purism to limit her outreach. She turned ideas and hopes like women’s rights, women’s political empowerment, and women’s leadership into reality for a large number of women.

Nigar and I share a love for music and humor. Whenever we were together, we sang and we laughed. She taught me a humorous qawwali they had created in Kinnaird College in the 1960s. I improvised it and included it on a feminist music CD in India. Once when I was visiting Lahore, Nigar literally locked me up and ordered me to write some songs for Aurat Foundation’s national campaign on women’s participation in local government bodies. I wrote several songs, which were included on the CD created by Aurat Foundation. Later on, for our campaign in India on the same issue, we used songs created by Aurat Foundation. This kind of give and take continued.

All my life, my entire family and I enjoyed her love and hospitality. Her home in Pakistan has been our home. Our homes in India are homes for her extended family. My daughter Meeto was close to Nigar and her son Bilal, who was at Oxford with her. When Meeto passed away in 2006 at the young age of 27, Nigar and Tariq Bhai came and stayed with us for 10 days in Delhi to give me solace and strength.

Eight days before Nigar left her body, my husband, Baljit, through whom I had met Nigar, also passed away. I wonder if the two of them will be meeting in the spirit world. In our feminist network Sangat, we have a slogan which expresses our vision and dreams:

I am not the wall that divides,

I am a crack in that wall.

Feminists like Nigar are cracks in all the walls that divide us: walls of ideologies, disciplines, religions, nationalities. This is why Nigar is local and global, personal and political; she is theory and practice, she is Pakistani and South Asian, she is yours and she is mine.

I salute you friend, sister, comrade, Nigar Ahmad. On this International Women’s Day 2017, when WAF celebrates your life, in Lahore, Islamabad and Karachi, I promise you that for the rest of my mortal life, I will continue to struggle for our shared dream of human rights, justice, freedom, dignity, and equality for all. I will continue to work for love, which binds you and me across all borders.

Bhasin is a social scientist, activist, poet, and author who specializes in development, education, gender, and media. She is the South Asia coordinator of the One Billion Rising movement.