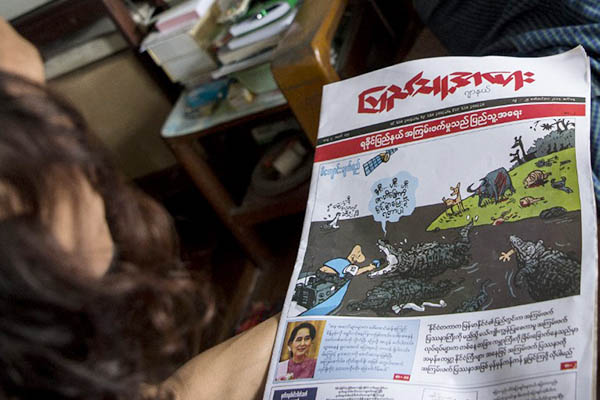 Fanned by civilian, military leaders public opinion within Myanmar is decidedly against the beleaguered minority

Cartoons taking aim at Rohingya Muslims are spreading rapidly across social media in mainly Buddhist Myanmar, where public opinion on the crisis stands in stark contrast to the outcry overseas.

Fanned by Myanmar’s civilian and military leaders, an information war has taken hold and is being embraced with gusto by a legion of satirists, meme-makers and internet trolls. Local cartoonists, many of whom earned their revered status for skewering the former junta, have taken aim at the Rohingya.

One widely shared sketch called ‘crocodile tears’ shows a group of reptiles swimming away from a bank of mutilated animals toward an eager Western cameraman. “I had to flee my motherland,” a crying crocodile says into the microphone, a swipe at the testimonies of Rohingya refugees who have arrived in Bangladesh with accounts of atrocities by Myanmar’s army.

“There is something untrue about what they [the Rohingya] are saying,” Win Naing, one of Myanmar’s most famous cartoonists, told AFP. The 58-year-old, whose pen name is Aw Pi Kyeh, said he just wanted to provoke thought in a highly charged situation. “We draw cartoons with a spirit that loves the country.”

For decades the paranoid former junta sequestered its people from technology, global opinion and debate. But since the country creaked open a few years ago Myanmar’s public has dived head first into Facebook and Twitter.

Now, anti-Rohingya diatribes are being ‘liked,’ shared and retweeted—reinforcing long-held religious hatreds against the minority.

Since late August, around 430,000 Rohingya Muslims have fled to Bangladesh, escaping an army crackdown in Rakhine state, which the U.N. has called “ethnic cleansing.” The global condemnation has triggered a defensive instinct in Myanmar where the Rohingya are not citizens and are broadly reviled.

Armed with crass humor, internet fame and riding a wave of public opinion, cartoonists have delivered sharp counter-punches. When Malala Yousafzai condemned fellow Nobel laureate Aung San Suu Kyi for failing to speak up for the Rohingya, one cartoonist hit back with a rendering of the Pakistani activist with human excrement instead of brains—a grim reference to her surgery after being shot in the head by the Taliban.

A sketch by cartoonist Okka Kyi Winn, liked nearly 10,000 times on his Facebook page, showed a U.N. insignia wrapped in a Middle-Eastern keffiyeh, suggesting the body is in cahoots with the Arab world.

While the intention may be pure satire, such images are contributing to a siege mentality in Myanmar, where keyboard warriors are trading blows with vocal pro-Rohingya groups scattered across the Muslim world. The prevailing view among the Buddhist majority is that foreign media and international NGOs have embellished the plight of the Rohingya and unfairly bashed Myanmar’s leader Aung San Suu Kyi.

‘The Lady’ has refused to weigh in on the squall of claims and counterclaims, saying only that there is a ‘huge iceberg of misinformation.’ Many outside Myanmar are baffled by the seeming lack of empathy, and the often-violent rhetoric from a Buddhist people.

But toxic Islamophobia has been brewing in the country for years, fed in part by official rhetoric that the Muslim Rohingya are foreign invaders intent on taking a Buddhist land. As his troops blanket Rakhine, Myanmar’s commander-in-chief Min Aung Hlaing has continued with Facebook posts branding the Rohingya as ‘terrorist extremists’ of ‘Bengali’ origin—a state-stamped slur that condemns them to the status of illegal migrants.

Newspapers, TV debates and social media have followed suit, jeering at the Rohingya as they flee, says Sein Win of the Myanmar Journalism Institute. Some of the loudest noises are coming from people who fought repression under the junta, he told AFP, in a remarkable reshaping of the young democracy’s political landscape.

“I am disturbed by the actions of the media, civil society and even former political activists. You need to care about humans across the board, not just when it suits you,” he said.

On Friday, U.S. Deputy Assistant Secretary of State Patrick Murphy condemned the hate speech on social media and urged the “better angels” of the Myanmar people to find empathy for the Rohingya. But cartoonists such as Maung Maung Fountain (pen name) argue their sketches “don’t insult any religion or any people.”

In one, he draws a camel—a code for Rohingya Muslims—that has edged its way into a tent made from the Myanmar flag then bellows ‘Human Rights’ at the startled Burmese man he has just evicted. “I meant say that some people want more and more rights and opportunities.”