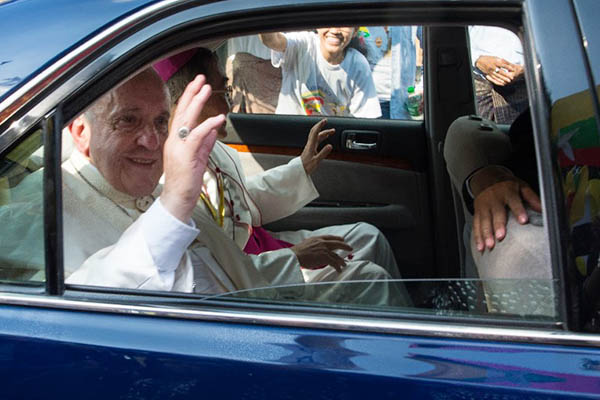 Pope Francis met Myanmar’s army chief on Monday at the start of a highly sensitive trip, with the military man saying he told the pontiff there was “no religious discrimination” in his country despite allegations of ethnic cleansing.

The 80-year-old pope, the first to travel to Myanmar, received Senior General Min Aung Hlaing for a 15-minute meeting at the archbishop’s residence in Yangon, where the pontiff is staying during his visit. At least 620,000 Rohingya have fled western Rakhine state to Bangladesh, describing rape, murder and arson at the hands of Min Aung Hlaing’s army and ethnic Rakhine Buddhist mobs.

The U.N. and U.S. have accused the military of “ethnic cleansing” in a campaign sparked by attacks by a militant Rohingya group on police border posts in late August. The army chief told the pope that “Myanmar has no religious discrimination at all. Likewise our military too… performs for the peace and stability of the country,” according to a Facebook post published by the general’s office a few hours after the meeting.

There is also “no discrimination between ethnic groups in Myanmar,” he added.

The Rohingya, who are denied citizenship, are not recognized as one of the Buddhist-majority country’s formal ethnic groups.

After the meeting a Vatican spokesman said the religious leader and the army chief had discussed the “great responsibility of the country’s authorities in this moment of transition.”

Myanmar was ruled by a junta for five decades until a civilian government led by Aung San Suu Kyi came to power last year. The army retains sweeping powers over security and political heft through a parliamentary bloc of seats. The army crackdown on the widely reviled Rohingya looms large over the pope’s four-day trip to a country with a tiny Catholic minority.

Francis has called the Rohingya his “brothers and sisters” in repeated entreaties to ease their plight as the latest round of a festering crisis has unfolded.

Earlier on Monday he was welcomed at Yangon’s airport in a colorful ceremony led by children from different minority groups in bright bejeweled clothes, who gave him flowers and received a papal embrace in return.

Nuns in white habits were among devotees waving flags as his motorcade swept past the golden Shwedagon Pagoda. “I saw the pope… I was so pleased, I cried!” Christina Aye Aye Sein, 48, told AFP after the pope’s convoy received a warm but modest welcome. “His face looked very lovely and sweet… He is coming here for peace.”

Myanmar’s estimated 700,000 Catholics make up just over one percent of the country’s 51 million people. But around 200,000 Catholics are pouring into Myanmar’s commercial capital Yangon before a huge open-air mass on Wednesday. “People came from all corners of the country, even if we could only see him for a few seconds,” Sister Genevieve Mu, an ethnic Karen nun, told AFP.

The pope’s speeches in Mynamar will be scrutinized by Buddhist hardliners for any mention of the word “Rohingya,” an incendiary term in a country where the Muslim group are labeled “Bengalis”—alleged illegal immigrants from Bangladesh.

On Tuesday Francis will meet Suu Kyi, a Nobel Peace Prize winner, whose luster has faded because of her failure to speak up publicly for the Rohingya.

He will hold two masses in Yangon.

Speaking shortly before he left Rome, the pontiff said: “I ask you to be with me in prayer so that, for these peoples, my presence is a sign of affinity and hope.”

The army insists its Rakhine operation has been a proportionate response to Rohingya “terrorists” who raided police posts in late August, killing at least a dozen officers. But rights groups have accused the military of using its operation as cover to drive out a minority it has oppressed for decades and forced out in great numbers in previous “clearance operations.”

Days before the papal visit, Myanmar and Bangladesh inked a deal vowing to begin repatriating Rohingya refugees in two months. But details of the agreement—including the use of temporary shelters for returnees, many of whose homes have been burned to the ground—raise questions for Rohingya fearful of returning without guarantees of basic rights.

Francis will travel on to Bangladesh on Thursday, where he will meet a group of Rohingya Muslims in the capital Dhaka.

In Kutupalong, the largest fresh encampment of Rohingya refugees in Bangladesh, 25-year-old Aziz Khan implored the pope to help his people. “If he can help us, then I want to tell him that we want our country and our rights back,” he said.