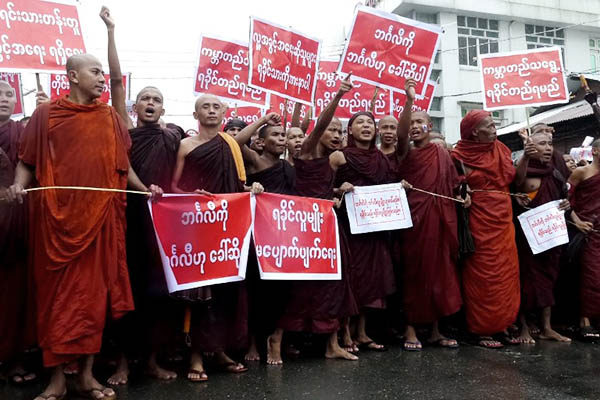 Thousands of Buddhists demonstrate against edict to identify Rohingya Muslims as ‘Muslim communities in Rakhine State.’

Myanmar’s bitterly divided Rakhine State saw mass protests Sunday as thousands of Buddhists, including monks, demonstrated in a show of opposition to a government edict referring to Muslim communities in the restive province, organizers told AFP.

Anti-Muslim rhetoric has spiked across Myanmar recently, with two mosques torched by Buddhist mobs in just over a week in a country where sectarian violence has left scores dead since 2012. Home to around one million stateless Rohingya Muslims, Rakhine State has been hardest hit by religious violence that has left tens of thousands of the persecuted minority in fetid displacement camps.

The Rohingya are reviled by Rakhine Buddhists who refuse to recognize any shared rights to the province and instead call them “Bengalis”—or illegal immigrants from nearby Bangladesh.

Aung San Suu Kyi’s new government has sought to defuse the row over the term Rohingya instead ordering officials to refer to “Muslim communities in Rakhine.” But protesters on Sunday said that too was unacceptable as it hands Muslims recognition in a Buddhist state.

“We reject the term ‘Muslim communities in Rakhine State’,” said Kyawt Sein, protest organizer in Sittwe, adding more than 1,000 people, including monks, had joined the rally in the state capital. Rally-goers there shouted slogans including “Protect Rakhine State,” while a protest in the town of Thandwe drew similar numbers.

“Bengalis should be called Bengalis,” Phoe Thar Lay,a leader of a local Rakhine youth group told AFP, adding that 17 townships across Rakhine were participating in protests on Sunday afternoon.

Most Rohingya live cut off from the Buddhist community in displacement camps or remote settlements since sectarian riots tore Rakhine apart in 2012. Persecution and poverty have forced tens of thousands to flee by sea, but the dangerous trafficking route south through the Bay of Bengal was closed late last year during a Thai crackdown on people smuggling.

Suu Kyi, a veteran democracy activist who championed her country’s struggle against repressive military rulers, has drawn criticism from rights groups for not taking up the cause of the Rohingya. Instead she has carefully sought to sidestep controversy, urging the international community to give the country “space” to unpick its sectarian problems.

The Rohingya are not recognized by the government as an official ethnic minority.

After a 12-day visit to Rakhine and other conflict sites in Myanmar, a U.N. rights investigator warned Friday that “tensions along religious lines remain pervasive across Myanmar society.”

Yanghee Lee urged the country’s new civilian government to make “ending institutionalized discrimination against the Muslim communities in Rakhine State… an urgent priority.” The same day a mosque was torched by a Buddhist mob in the jade-mining town of Hpakant in the far north.

That incident came eight days after another crowd of Buddhists destroyed another mosque in central Bago, forcing the Muslim community to seek refuge in a neighboring town.