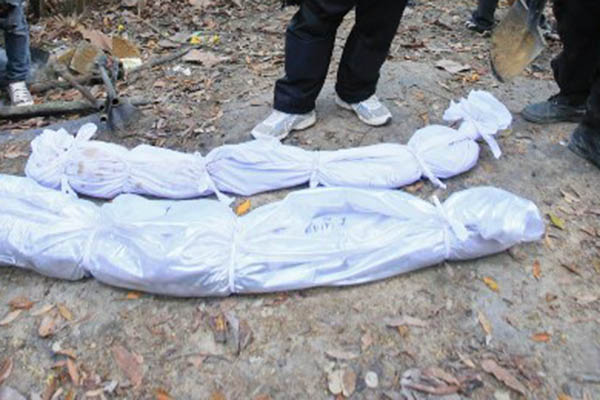 Searchers on Monday found 17 more Hindu bodies in mass graves in Myanmar’s Rakhine state, the government said, a day after 28 corpses were exhumed in what the army says is evidence of a massacre by Muslim Rohingya militants.

Northern Rakhine has been ravaged by communal violence since Rohingya insurgents staged deadly raids on police posts on Aug. 25, unleashing an army crackdown that has displaced hundreds of thousands of civilians. The vast majority—more than 430,000—are Rohingya Muslims who have fled across the border to Bangladesh from a military campaign, which the U.N. says likely amounts to ethnic cleansing.

But tens of thousands of ethnic Rakhine Buddhists, and the region’s small population of Hindus, have also bolted from their homes, saying they were attacked by Rohingya militants.

Photos posted by the government’s Information Committee showed two rows of decomposed bodies laid out across a patch of grass.

Ni Maul, a Hindu leader who joined the search alongside soldiers and police, said the new corpses were of Hindu men aged between 30 and 50 and buried in two pits near the other gravesites. “We are still searching together with soldiers and police as we believe more than 100 people were killed at that time,” he told AFP.

Displaced Hindus from that area, known as Kha Maung Seik, have told AFP that Rohingya fighters stormed their communities on Aug. 25, killing many and taking others into the forest. They showed AFP a list of 102 people from two villages—Ye Baw Kyaw, where the bodies were found, and Taung Ywar—who are feared dead by relatives now sheltering in camps.

Several Hindu women were also abducted by the militants, according to the displaced Hindus, who wept as they recounted the bloodshed.

With the government blocking access to the conflict zone, it is difficult to verify the range of accusations that have intensified ethnic hatreds in Rakhine. But the army has steadfastly blamed violence on the Rohingya—a Muslim minority it has been trying for years to eject from Myanmar—while highlighting the suffering of other ethnic groups swept up in the violence.

The focal point of the unrest, northern Rakhine’s Maungdaw district, was once home to a fragile mosaic of religious communities, dominated by the Rohingya. But vast swathes of the border region are now completely emptied of Muslim residents, with nearly 40 percent of Rohingya villages abandoned in under a month.

Frightened and dispossessed ethnic Rakhine Buddhists and Hindus, who have largely fled south, say they see no future alongside their former Muslim neighbors. “I do not dare go back to the village,” said Kyaw Kyaw Naing, one of hundreds of displaced Hindus sheltering in a derelict football stadium in Rakhine’s state capital Sittwe. “We still do not know yet how many of those dead bodies include relatives from our camp,” added the 34-year-old, whose Hindu name is Shu Bown.

In Bangladesh, relief agencies are struggling to meet the vast needs of the Rohingya cramming into shanties in Cox’s Bazar, an influx the U.N. has described as the “fastest and most urgent refugee emergency in the world.”

Yet there is little sympathy for the Muslim minority inside Myanmar, where Islamophobia has been stewing for years among the overwhelmingly Buddhist population. Even before the latest eruption of violence, the 1.1 million-strong Rohingya were relegated to precarious and impoverished lives, with hundreds of thousands trapped in refugee camps following previous persecution. Those outside the camps were subject to laws that stripped them of citizenship and severely restricted their movements and access to jobs, schooling and healthcare.

Analysts say the repression helped give rise to the Arakan Rohingya Salvation Army, whose raids plunged the region into crisis.