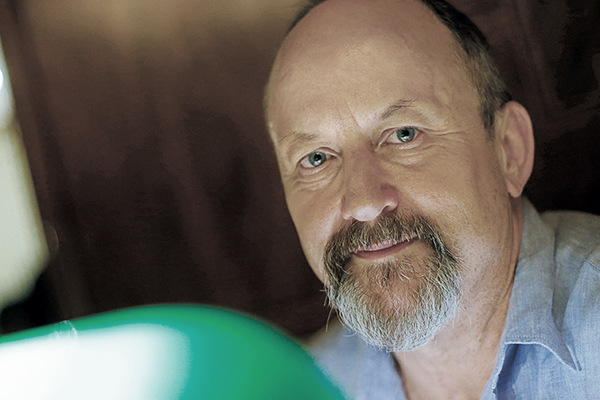 [dropcap]I[/dropcap]t’s difficult to read anything about Daniel Woodrell without being confronted by a caravan of the usual suspects: Faulkner, Hemingway, and O’Connor; James M. Cain and Charles Portis; William Kennedy, Denis Johnson, and Cormac McCarthy. In review after review, the gist is clear, even when the referent happens to be O’Connor: Woodrell is a masculine scribe, a tough-guy excavator of the destructive, testosterone-bloated male ego that seeks its own earthly fulfillment through the dumping of blood. The incessant grouping of Woodrell with the same cast of immortals is meant to be honorific, of course, but it can leave a lingering whiff of diminishment, as if Woodrell were a mere epigone, his fiction just a salad of American mavens without its own beaming uniqueness.

His 2006 masterwork Winter’s Bone should have dispatched the caricature of Woodrell as a regionalist reporter on the XY chromosome. Its protagonist, Ree Dolly, is so compelling and dignified, so sympathetic and driven, so downright convincing as a female sensibility, that I revisited Woodrell’s seven previous novels to hunt for hints of this anomaly, only to discover that Ree Dolly was no anomaly at all: Woodrell has been crafting distinctive female characters from day one. It was exhilarating to see Winter’s Bone thrust its author into national visibility after his long years of toiling for a too-narrow readership. His first story collection, The Outlaw Album, appeared in 2011 and proved that what Woodrell shares with Denis Johnson isn’t what most critics believe—the poetical assertion of derelict male initiative—but rather a genius for compression: Johnson’s and Woodrell’s most successful fictions throw their bantam punches in fewer than 200 pages. Brevity requires a novelist with specialized skills of precision. Chekhov said, “Whenever I read my own or other people’s works it all seems to me not short enough.”

The Maid’s Version is Woodrell’s eighth novel and presents an intriguing case study of how to follow an uncaged success such as Winter’s Bone: don’t swap any of the principal ingredients. The plot has a single joist: an uncovering of who caused the Arbor Dance Hall explosion in 1929 in the town of West Table, Missouri. The lowly protagonist, Alma DeGeer Dunahew, stomps through a poisoned world governed by male stupidity and those who wield the checkbook. The much-lauded Woodrellian prose continues to dazzle with its demotic/poetic cadences. And the story’s violence is tempered by tenderness between Alma and her younger sister, Ruby, who perished with 41 others in the dance hall inferno—a tenderness identical to the one between Ree Dolly and her best friend, Gail Lockrum, in Winter’s Bone.

For Hemingway, violence is culturally mandated, a necessary sign of election in a masculine, warrior-god cosmos, while Faulkner regards violence mostly as a concussion of psychological abnormality and social discord, a clash of swivet and circumstance. In his criminally underrated novel Galápagos, Kurt Vonnegut writes this: “From the violence people were doing to themselves and each other … a visitor from another planet might have assumed that the environment had gone haywire, and that the people were in such a frenzy because Nature was about to kill them all.” That’s an accurate opinion of what you find in McCarthy—for McCarthy and O’Connor both, violence becomes a badge of the postlapsarian, a consequence of the fact that God himself is a blood-wet misfit.

But Woodrell handles violence with revulsion and heartbreak, with the regret and disgust it requires of the virtuous. Bloodshed in his pages results either from self-preservation and economic necessity—as in Jessup Dolly’s murder by kinfolk in Winter’s Bone—or else from a just retribution by those who dwell in remote locales and concoct their own decrees. Read the plentiful massacre scenes in Blood Meridian and you half suspect McCarthy is enjoying himself. Read of Ree Dolly’s gruesome beating in Winter’s Bone, or of the conflagration of the dance hall in The Maid’s Version—“waltzing couples murdered midstep, blown toward the clouds in a pink mist chased by towering flames”—and you know Woodrell is as appalled as you are.

About the aftermath of the dance hall bombing: “Throughout that summer human scraps and remains were discovered in gardens two streets, three streets, four streets away, kicked up in the creek by kids chasing crawdads, in deep muck at the stockyards halfway up the hill. That fall, when roof gutters were cleaned, so many horrid bits were come across that gutters became fearsome, hallowed, and homeowners let a few respectful leaks develop that winter rather than disturb the dead.”

No gloating in those lines, no reveling in the carnage that dismembered and torched so many citizens.

Reviewers are agog for Woodrell’s sentences, and the most zealous of them can sometimes bust a button: one dubbed him “the Shakespeare of the Ozarks,” and you can bet Woodrell rolled his eyes that day. Another spoke of his “Old Testament prose,” which means almost nothing: you can have Old Testament themes, but not Old Testament prose, since the Torah was of course written in Hebrew and comes to us through several different languages in manifold translations. One suspects the reviewer is trying to refer to the deathless rhythms of William Tyndale in either the Geneva Bible or King James version (and which naturally contain both Old and New Testaments). But even so, Woodrell’s rhythms match Tyndale’s only insofar as all English rhythms match Tyndale’s in one respect or another: the man invented our language.

From the start Woodrell has been demonstrating that his true subject is neither the articulation of Ozark masculinity nor the necessity of violence, but loyalty.

What’s the purpose of the poetical in prose fiction? Every day the term “lyrical” is bandied around by reviewers and newspaper critics—almost as often as the clichéd compliment “brilliant”—with little acknowledgment of what lyricism in fiction attempts to achieve. The poetical register reaches always for the spiritual, for the sublime. A layman’s lyricism such as Woodrell’s appears to have no investment in the numinous, and his characters certainly aren’t aware of spirit by orthodox meanings—they are secular souls, to be sure: spirit deserves more than preachers. In Winter’s Bone: “Pine trees with low limbs spread over fresh snow made a stronger vault for the spirit than pews or pulpits ever could.”

There exists everywhere in his fiction a longing for a deeper, fuller mode of being, one that simultaneously worships and wishes to transcend the pressing physicality of Ozarkian earth and weather, of pedigree and pettiness. And Woodrell makes that longing manifest in the rhythms of the prose. It’s simple to see in Whitman or Hopkins how style cannot be disjoined from substance, but we forget that the same holds for the most potent prose writers. This is what Nabokov meant when he asserted that “style is matter.” About the site of the dance hall explosion in The Maid’s Version:

“The congregated silhouettes of ruin attracted steady visitors who arrived most evenings around sunset to stand and behold in the everyday wonder of sinking light just what contortions tragedy had wrought and left in view. Remains of wall torn to fractions still somehow stood here and there to make partial and keening shapes in the gloaming.”

The everyday wonder of sinking light. Partial and keening shapes in the gloaming. Eternal mystery coupled with the dimmest hope of deliverance work to great effect in those lines.

Despite being emphatically rooted in the dirt and blood of daily living, Woodrell’s world is pitched forever toward mythos. It is this pitch, and not his language, violence, or robust regionalism, that deserves comparison to McCarthy. It is also the factor that separates Woodrell from those middling novelists content to dish us a catalog of the quotidian in the hope of attaining a worthless verisimilitude. For all his emphasis on the origins and repercussions of pain in individual lives, Woodrell is, like every truly great novelist, a mythmaker with both eyes on the absolute. Alma’s grandson, Alek, narrates the old woman’s reminiscing, her fanged grief over the loss of her sister, and says she “belonged in a fairy tale of some sort, and maybe not the happy kind.” At the rim of West Table the trains rush by “toward the fabled beyond.” Woodrell comprehends that without intimations of that fabled beyond, without a grating against what it might mean, a novel moves only toward another simulacrum of played-out reality.

From the start Woodrell has been demonstrating that his true subject is neither the articulation of Ozark masculinity nor the necessity of violence, but loyalty. In his storied world as in ours, loyalty is the only currency with any real value. Doyle Redmond, the narrator of Woodrell’s novel Give Us a Kiss (1996), says, “Kin of any sort means a little something in the Ozarks.” In The Maid’s Version, after Ruby is roughed up and bloodied by a suspecting married woman, Alma finds the woman and presses her face into a storefront window. There’s an extraordinary moment afterward when, instead of firing Alma, her employer, the perpetually ill Mrs. Glencross, says, “Valiant, so valiant.” When Ruby enters into an affair with Arthur Glencross, Alma intuitively understands that their passion—like all passions ancient and unchecked—will wreak large ruin.

You can be certain that Woodrell does not offer a complete vista of his region—his talent has always been for a kind of expressionistic bravado, a hyperbolism with only one foot in the facts. He’s an imaginative artist, not a demographer. Since Tomato Red in 1998, he has increasingly favored a disjunctive, fragmented narrative form. In addition to being a portrait of a place—not all novels are—The Maid’s Version is an ensemble story of those affected directly or indirectly by the bombing. Woodrell’s early fiction was packaged as noir, but that never seemed accurate enough: he’s too ruminative, too vatic for noir. And often too comical—see “The Echo of Neighborly Bones,” the opening story in The Outlaw Album. His humor often goes unnoticed because many readers are resolutely stymied by humor in literature (O’Connor, too, is frequently shortchanged by those same readers). If The Maid’s Version, like Winter’s Bone, has been denuded of humor, deprived of the satirical edge that can stab into his storytelling, it’s because Woodrell harbors the appropriate reverence, a solemn earnestness, for these characters and their anguish. Some tragedies ask to remain untouched by levity, and the wise novelist knows when to honor the appeals of his creation. In its fealty to the Athenian conception of tragedy—that collision of the accidental and ordained—The Maid’s Version is one more resplendent trophy on the shelf of an American master.