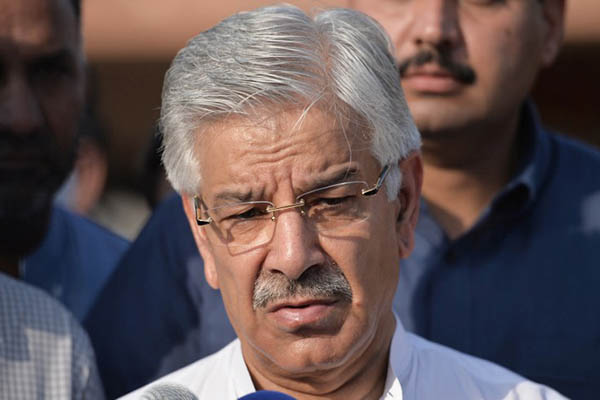 In a statement issued after the arrest NAB Lahore said that Asif had allegedly accumulated assets in excess of his income and had concealed the “nature, means and transfer of assets.” It said that the investigation was proceeding under Section (V) of the National Accountability Ordinance, 1999 and Section (3) of Anti-Money Laundering Act, 2010.

According to the anti-graft watchdog, Asif become a senator in 1991, was elected to Parliament several times, and had also served as a federal minister. It said that his assets prior to assuming public office in 1991 totaled Rs. 5.1 million and had increased to Rs. 221 million in 2018. This, it said, did not match his known sources of income.

The NAB statement also highlighted that Asif had claimed to earn Rs. 130 million from a job at U.A.E.-based firm M/S IMECO, but was unable to provide evidence supporting this salary. “It clearly shows that the accused wanted to prove his assets through fake sources of income,” alleged the statement.

NAB has also alleged that the PMLN leader was running a company under the name of his employee, Tariq Mir, which had a bank account containing Rs. 400 million with no source of funding. It said the purpose of the NAB inquiry was to find out whether the foreign income declared by Asif was procured through legal means.

Party supremo Nawaz Sharif, in a brief statement, termed Asif’s arrest “a drama the likes of which he had never seen in his life.” He told reporters in London that the government was misguided if it believed such tactics would weaken the opposition’s Pakistan Democratic Movement alliance.

In a subsequent posting on Twitter, he termed the arrest a result of the “nexus between the selectors and the selected,” and claimed that it reflected the growing state of panic within the government.

PMLN Vice President Maryam Nawaz also slammed the arrest in a press conference. Accusing NAB of “lurking, waiting to pounce” on Asif, she said he had been “abducted” within minutes of leaving the house of Ahsan Iqbal, where he was attending a party meeting. She alleged that NAB often arrested people in assets beyond means cases when it did not have any concrete evidence. “You make use of vague charges to arrest someone,” she said.

The PMLN leader also alleged that Asif had told her a few days ago that “someone” had told him to abandon Nawaz Sharif and all the cases against him would go away. “Khawaja Asif told them they can do what they wish … he was told he will have to face the consequences … then this happens a few days later,” she added.

On Wednesday morning, an accountability court in Islamabad approved two-day transit remand for Asif and order NAB to immediately present him before the relevant court in Lahore, where the case against him is proceeding.