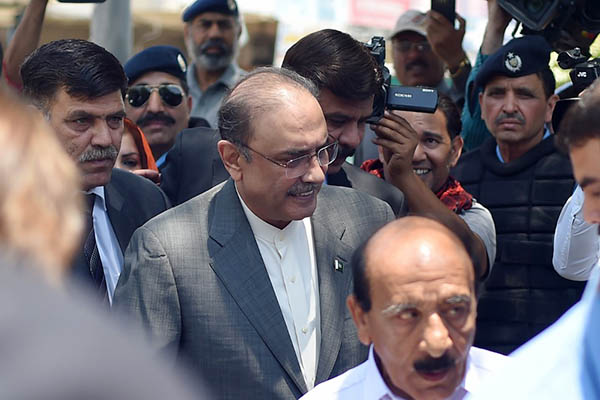 Former president Asif Ali Zardari was arrested on Monday after his bail application was rejected in connection with a high-profile money laundering case that saw millions allegedly siphoned out of Pakistan.

Zardari, husband of assassinated former prime minister Benazir Bhutto, served as president from 2008 until 2013 and has long been the subject of corruption allegations, and he is widely known in Pakistan as “Mr. Ten Percent.”

According to local media, NAB had obtained arrest warrants against Zardari yesterday and could immediately proceed to take him into custody following the Islamabad High Court verdict. His sister, Faryal Talpur, also had her pre-arrest bail rejected but as NAB has not obtained arrest warrants against her, she cannot be taken into custody yet. Both Zardari and Talpur still retain the right to appeal the IHC judgment at the Supreme Court.

Small scuffles erupted between police and supporters of Zardari’s Pakistan Peoples Party (PPP) outside his family’s residence in Islamabad as he was taken into custody. A senior PPP official confirmed the arrest.

The charges in the latest case center around allegations Zardari laundered vast sums of money through suspect bank accounts and companies. Last year, Pakistani authorities discovered several accounts in the name of poor people that had been flooded with cash, then suddenly emptied.

The Supreme Court established a joint investigation team in September to investigate the scourge, finding that at least $400 million had passed through “thousands of false accounts.”

Zardari has repeatedly dismissed allegations he had a hand in the scheme, calling the government an instrument of the military and labeling Prime Minister Imran Khan the Army’s “blue-eyed boy.”

Never popular and always shrouded in controversy, Zardari—who was once jailed for 11 years for corruption—stepped down from the president’s office in 2013. But he has continued to serve as co-chairman of the opposition PPP.

The arrest comes as the economy continues to spiral and discontent simmers in Pakistan following repeated devalution of the rupee, soaring inflation, and rising utility prices.