Narendra Modi Sworn in As Prime Minister of India 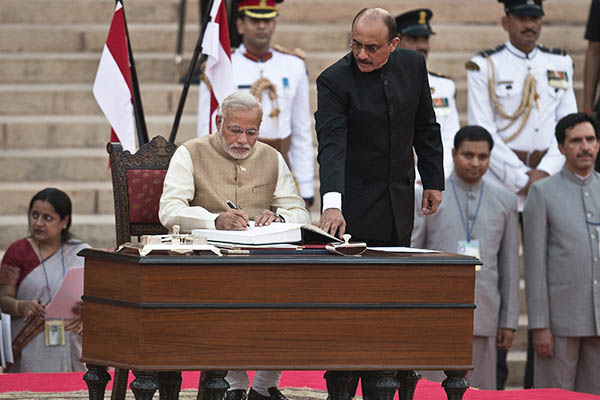 India’s Narendra Modi was sworn in as prime minister on Monday, promising to forge a “strong and inclusive” country on a first day that signaled his bold intentions.

The 63-year-old Hindu nationalist broke with tradition and invited his Pakistani counterpart Nawaz Sharif who arrived at the ceremony hailing a “great moment and a great opportunity” for peace in the region.

Pro-business Modi unveiled a sharply reduced government of 46 members including him, a cut of 25 from that of his predecessor Manmohan Singh, to speed up decision-making and slash India’s notorious bureaucracy. “Together we will script a glorious future for India,” Modi said in a statement posted on the revamped prime minister’s website shortly after he took the oath in front of President Pranab Mukherjee. “Let us together dream of a strong, developed and inclusive India that actively engages with the global community to strengthen the cause of world peace and development,” the statement said.

Ten days after his Bharatiya Janata Party (BJP) won the first parliamentary majority since 1984, Modi entered office riding a wave of public support that has obscured his past as a controversial politician tainted by religious violence. The former tea boy has risen through the ranks of rightwing Hindu organizations and was boycotted by Western nations for a decade over anti-Muslim riots that occurred while he was running his home state of Gujarat in western India in 2002.

He said in his statement that he was elected with “a mandate for development, good governance and stability”—avoiding any reference to the Hindu nationalist plank of his party’s election manifesto.

Senior members in his government are Arun Jaitley, tipped as finance minister, Sushma Swaraj, likely to be foreign minister, and Rajnath Singh, who is lined up for the home portfolio. The inclusion of figures such as Uma Bharti, a hardliner once expelled from the BJP after accusing the party of abandoning core Hindu concerns, indicated that the religious right would retain some influence.

As stocks markets rose at the prospect of a pro-business leader taking the helm of the world’s largest democracy, the prime minister of India’s nuclear-armed rival gave voice to a widespread sense of optimism. “This is a chance to reach out to each other. Both governments have a strong mandate,” P.M. Sharif told India’s NDTV network, according to a transcript provided by the Pakistan High Commission. “Both countries should rid the region of instability and insecurity that has plagued us for decades,” he said.

He promised to pick up the threads of a failed peace process that went on during his second term in office and coincided with the last BJP government in India. In 1999, then-Indian prime minister Atal Bihari Vajpayee rode a bus to Lahore to sign an accord with Sharif, but three months later the neighbors nearly went to war over the disputed Himalayan territory of Kashmir.

Sharif sat among other leaders from South Asia invited for the ceremony at the vast colonial-era presidency building, where thousands of dignitaries sweltered in the mid-summer heat during the oath taking.

One woman fainted during the 70-minute ceremony, which was also attended by the country’s richest business family, the Modi-supporting Ambanis, as well as Bollywood stars, national cricket captain M. S. Dhoni and Hindu holy men.

After a decade of left-leaning Congress party rule, Modi is expected to move India firmly to the right in the next five years with a mantra of “Minimum Government, Maximum Governance.”

The BJP secured the first majority in 30 years at the election, trouncing the scandal-plagued Congress run by the Nehru-Gandhi political dynasty on a promise of reviving manufacturing and investment to create millions of jobs. Modi’s rags-to-riches story and reputation as a clean and efficient chief minister of prosperous Gujarat state was a crucial factor in the victory, which was described as a “democratic asteroid” by one commentator.

“The country needs to be steered in the right direction now and only Modi can do it. He’s got a strict school headmaster quality about him,” said Kavita Lal, a 32-year-old IT professional. Like many, she mocked the prime ministership of the 81-year-old Singh who rarely spoke to the media and was widely seen as lacking authority. “It just seemed like for the last 10 years we had no leader in the country,” she said.

Since election results on May 16, Modi has been at pains to put his divisive past behind him, appearing statesmanlike and generous even to political opponents. In a rare sign of emotion last week, he choked back tears as he promised to try to live up to the expectations of all Indians including “our weakest and poorest” during a speech in parliament.