Narendra Modi Sworn in for Second Term as India P.M. 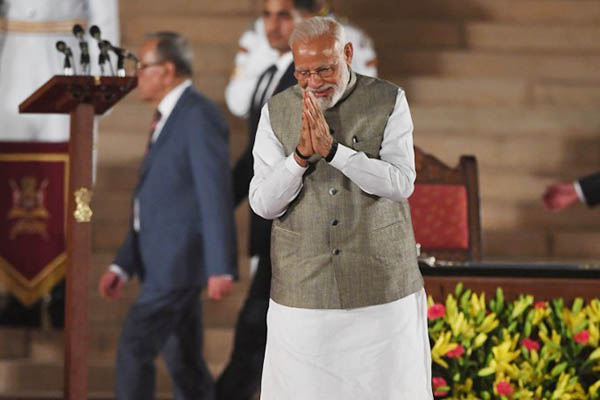 India’s Prime Minister Narendra Modi launched his historic second term at a solemn ceremony in front of cheering supporters on Thursday, as he prepared to unveil a drastically revamped Hindu nationalist government.

Modi was the first of more than 50 cabinet ministers and deputy ministers to be sworn in at the presidential palace in front of 8,000 people including South Asian leaders, Bollywood stars and leading political figures.

The prime minister—whose right-wing Bharatiya Janata Party (BJP) made history by increasing their majority in a second straight landslide election win—walked up to take his oath of office to a standing ovation, with supporters in the crowd chanting “Modi, Modi.”

Modi is expected to announce his new cabinet in the hours after the ceremony, as well as find a top post for his trusted enforcer, BJP president Amit Shah. A new finance minister was guaranteed after the influential outgoing minister, Arun Jaitley, 66, announced on Wednesday that he would not serve again because of poor health.

Outgoing foreign minister Sushma Swaraj was not among the group to take the oath meaning she would also be replaced.

Modi won the election after portraying himself through the campaign as a nationalist strongman who would protect the country’s security. He was aided by a military showdown on the border of divided Kashmir when Indian and Pakistani fighter jets staged tit-for-tat raids.

Modi said he needed a new term to further his promise of a “new India” taking its place as a rising economic power in the world.

A former top ministry bureaucrat, S. Jaishankar, was among those sworn in as a full cabinet member on Thursday, indicating he could be the new foreign minister. Smiti Irani, who pulled off one of the biggest victories of the election by beating opposition Congress party leader Rahul Gandhi in his own family bastion, was expected to get a promotion after being demoted in Modi’s first term.

Gandhi, whose Congress party suffered a second straight humiliating defeat, was among the crowd with his mother Sonia, the former Congress leader. Media reports said Gandhi, the son, grandson, and great-grandson of Nehru-Gandhi dynasty prime ministers, has told party leaders he wants to stand down. But party supporters have staged demonstrations outside his home calling on him to stay.

India is expected to overtake Britain as the world’s fifth biggest economy in 2020. Modi’s government is expected to push a strong Hindu agenda, including the construction of a new Hindu temple on the site of a Muslim mosque razed during riot in 1992 in the holy city of Ayodhya. Many Hindus believe a spot in the city marks the birthplace of Lord Ram and that the medieval Babri mosque that stood there for 460 years was only built after the destruction of an earlier temple.

India’s Supreme Court has named a three-man panel including a famous guru to resolve the seemingly intractable and highly emotive dispute. But the temple was promised in the BJP’s election manifesto. “Nationalism is our inspiration … good governance is our mantra,” Modi said at the launch of the manifesto that also vowed to spend more than $1.4 trillion on new infrastructure over five years to create much-needed jobs.

While India’s economy grew at about seven percent each year during Modi’s first five-year term it did not produce the jobs needed to find work for the estimated 1.2 million job seekers entering the labor market each month.