NASA Counts Down to Pluto Flyby 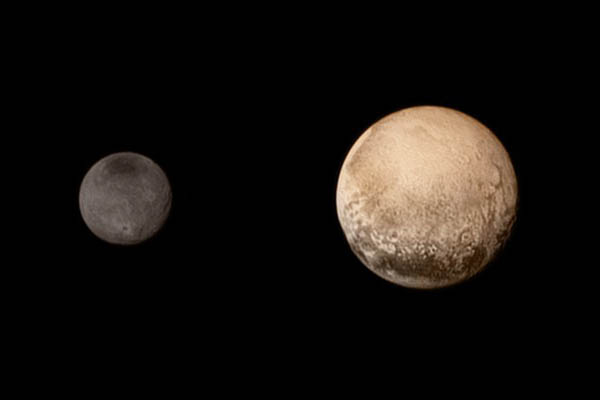 The closest approach of New Horizons to the dwarf planet is due for Tuesday morning, but it will be hours before scientists hear back from the spacecraft.

An unmanned NASA spacecraft will reveal details of Pluto’s surface for the first time Tuesday, as it speeds by the dwarf planet after a near decade-long journey.

New Horizons is about the size of a baby grand piano and has been described as the fastest spaceship ever built. It is currently moving at a speed of 30,800 miles per hour. But there were some jitters Monday as the $700 million spacecraft sped toward the last undiscovered frontier in the solar system.

According to principal investigator Alan Stern, there is a one in 10,000 chance that the spacecraft could be lost in a collision with debris around Pluto, long considered the farthest planet from the Sun until it was reclassified as a dwarf planet in 2006. The closest approach is set for Tuesday at 7:49 a.m. NASA television coverage begins at 7:30 a.m. But it will be hours before scientists hear back from the spacecraft—the first to visit an unexplored planet since the NASA Voyager missions launched in the 1970s—because New Horizons will be busy snapping pictures and collecting data.

It is supposed to send a “phone home” signal to Earth at 4:20 p.m., but that will take nearly five hours to reach scientists. So NASA will not announce until about 13 hours after the flyby, at 9:02 p.m., whether or not the spacecraft survived the high-speed encounter. “While I don’t lose sleep over this, the fact is, tomorrow evening is going to be a little bit of drama,” said Stern on Monday. “Until we pass that point tomorrow evening we won’t really know with certainty that we cleared the system and that there were no debris strikes.”

Stern said experts have searched for potential debris and have not found any of concern. But spaceflight is a risky business, and Stern described the Kuiper Belt, where Pluto resides on the edge of the solar system, as “more or less a shooting gallery, with lots of small primordial comets and other things much smaller than Pluto.”

Never before has a spacecraft ventured into the Kuiper Belt, and New Horizons has been on its way there for more than nine years—a journey of some three billion miles. It will pass by Pluto at a distance of 7,767 miles. “We are flying into the unknown,” Stern told reporters.

What is currently known about Pluto could probably fit on a few index cards, Stern has said. New Horizons’ data will enable entire textbooks to be written about the mysterious celestial body. Already, the pioneering NASA mission has confirmed the existence of a polar ice cap on Pluto, and found nitrogen escaping from Pluto’s atmosphere. Stern also said the dwarf planet appears slightly larger than previously thought, with a radius of 736 miles.

After New Horizons closed in and sent back accurate measurements, it put to rest a decades-long debate over Pluto’s size. The larger than expected size means Pluto’s density is a bit lower than scientists thought and the proportion of ice in its center is higher, NASA said.

Stunning visual features are coming into focus for the first time, including a light-colored heart shape nestled near a dark spot nicknamed “The Whale.” And more detail is expected in the days to come, according to deputy project scientist Cathy Olkin.

“Right now, we are taking data that if you could transport [New York’s] Central Park to Pluto you would be able to identify the ponds in Central Park, that is the kind of resolution we will be getting,” she said. “We are going to be making stereo maps so that we can see how tall the mountains are and how low the valleys are,” Olkin added.

Next, scientists will watch the sun rise and set behind Pluto, use New Horizons’ seven instruments to create a full picture of Pluto and its five moons, and study the dust in the outer solar system and the atmosphere around Pluto and its largest moon, Charon. Learning more about Pluto has captured the public’s attention because it speaks to the origins of the Earth and the larger questions of whether life could exist elsewhere, according to NASA’s John Grunsfeld, associate administrator of NASA’s science mission directorate.

“The Pluto system is a fossil remnant of the beginnings of our solar system,” Grunsfeld said. “We are going to learn about where we are coming from,” he said. “It is opening up a new realm of exploration.”