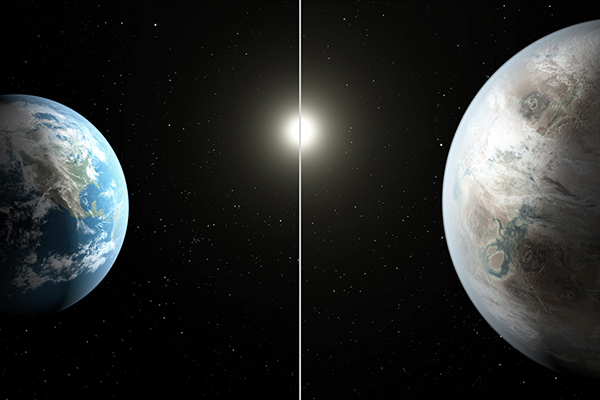 Kepler 452b appears to have many similarities to Earth, but is 1,400 light years away.

Astronomers hunting for another Earth have found the closest match yet—a potentially rocky planet circling its star at the same distance as our home orbits the Sun, NASA said Thursday.

Named Kepler 452b, the planet is about 60 percent larger than Earth. It could have active volcanoes, oceans, sunshine like ours, twice as much gravity and a year that lasts 385 days, scientists said.

“Today we are announcing the discovery of an exoplanet that, as far we can tell, is a pretty good close cousin to the Earth and our Sun,” said John Grunsfeld, associate administrator for NASA’s Science Mission Directorate in Washington.

NASA has made a handful of such announcements in the past, but each of those discoveries fell short of being Earth-like in one way or another, such as being too hot to host life or having a surface that was likely gaseous rather than hard and rocky. “This is about the closest so far,” Grunsfeld added, describing Kepler 452b as our “closest twin,” or “Earth 2.0.”

The planet was detected by the U.S. space agency’s Kepler Space Telescope, which has been hunting for other worlds like ours since 2009. This planet sits squarely in the Goldilocks zone of its star, where life could exist because it is neither too hot nor too cold to support liquid water, the U.S. space agency said.

“Today the Earth is a little less lonely,” said Jon Jenkins, Kepler data analysis lead scientist at NASA’s Ames Research Center in Moffett Field, California. “Because there is a new kid on the block that just moved in next door, in terms of the surface temperature of the star it orbits and the energy it receives from its star.”

Kepler 452b’s star is 1.5 billion years older, four percent more massive and 10 percent brighter than our Sun. But at a distance of 1,400 light-years, humankind has little hope of reaching this Earth-twin any time soon.

“This is really the first step—and I think humankind’s first step—at answering that question of, ‘Are we alone in the universe?’” said Jeff Coughlin, Kepler research scientist at the Search for Extraterrestrial Intelligence (SETI) Institute in Mountain View, California. “You and I probably won’t be traveling to any of these planets without some unexpected breakthrough, but you know, our children’s children’s children may.”

If the planet is rocky—and scientists believe that it has a better-than-even chance of being just that—then it could be headed for a fearful scenario, as the heat from its dying star evaporates Kepler 452b’s lakes and oceans. “Its location vis-à-vis its star could mean that it is just entering a runaway greenhouse phase of its climate history,” said Doug Caldwell, a SETI Institute scientist working on the Kepler mission. “The increasing energy from its aging sun might be heating the surface and evaporating any oceans. The water vapor would be lost from the planet forever,” he added. “Kepler 452b could be experiencing now what the Earth will undergo more than a billion years from now, as the Sun ages and grows brighter.”

Jenkins was more optimistic, however, based on the planet’s age, size, and higher mass and gravity than on Earth. “This planet is protected at least for a little while longer, 500 million years or so, from experiencing the runaway greenhouse [effect], assuming that it is six billion years old,” he told reporters.

The Kepler mission launched in 2009 to search for exoplanets, which are planets outside our solar system, particularly those about the size of Earth or smaller. On Thursday, NASA released the latest catalog of exoplanet candidates, adding more than 500 new possible planets for a total of 4,696 found by the space-based telescope.

“The confirmation of Kepler-452b brings the total number of confirmed planets to 1,030,” NASA said.

The new catalog includes 12 candidates that are less than twice the diameter of Earth and which are orbiting in the habitable zones of their stars.

Kepler identifies possible planets by watching for dips in the brightness of stars, which could be caused by a planet passing between the star and the telescope. Other scientific tools are needed to judge whether the planet is gassy or rocky and what its mass may be.

The Kepler mission has cost NASA about $600 million. Two years ago, NASA announced that two of Kepler’s four orientation wheels had broken down, leaving the space telescope beyond repair.

Another NASA spacecraft, called TESS [The Transit Exoplanet Survey Satellite] is scheduled to launch in 2017 on a mission to find the closest habitable planets to Earth.