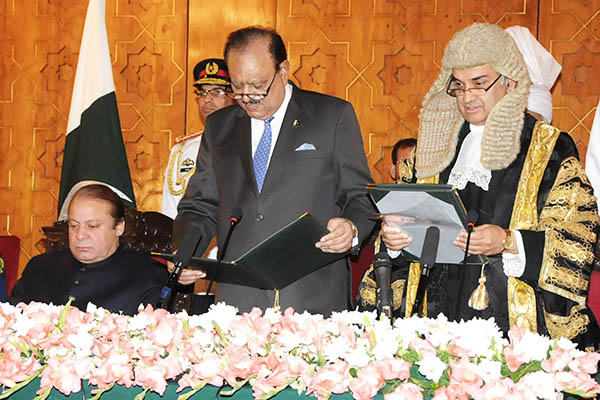 Justice Nasir-ul-Mulk, Pakistan’s senior-most judge, on Sunday took oath of office to become the 22nd Chief Justice of Pakistan, an office he will hold until his retirement on Aug. 16, 2015.

Mulk primarily practiced law in Peshawar prior to being elevated to the Supreme Court, and his colleagues from his time there still praise his work ethic. “I regard [Mulk] as a lawyer and colleague, as he practiced law at the Peshawar High Court for over 17 years,” says Barrister Masud Kausar, senior lawyer and former governor of Khyber-Pakhtunkhwa province. “He was famous with his colleagues for his competency and positive approach toward the cases he contested while practicing law,” he said, adding that Mulk had been elected president of the Peshawar High Court Bar Association twice—in 1990 and 1993.

“The current chief justice is the son of ex-senator Kamran Khan, who belonged to the Mingora area of Swat. He qualified for his LLB from Peshawar University in 1972 and then went to London, where he obtained his LLM from the Honorable Society of the Inner Temple in 1976,” said Qazi Anwar, another senior lawyer based in Peshawar. “[Mulk] was elected as a judge of the Peshawar High Court on June 6, 1994, and was appointed the chief justice of the court on July 31, 2004,” said Anwar, adding, “He was elevated to the Supreme Court in 2005.”

“[There is a chance] judicial activism will increase under Mulk’s tenure,” warned Anwar, referring to the often controversial judicial rulings on matters deemed outside the Supreme Court’s purview under ex-chief justice Iftikhar Chaudhry. “The current chief justice is a very proactive judge and is very strict about the implementation of law in its letter and spirit,” added Anwar. Mulk has previously stated that if Pakistan’s state institutions differ on implementation of the Constitution, the Supreme Court has the right to intervene, hinting at the same.

“He was part of the seven-member bench of the Supreme Court of Pakistan that issued orders against the emergency imposed by then president Pervez Musharraf,” said Hussain, the ex-registrar. “He also served as acting chief election commissioner for eight months,” he added.

“[The newly appointed chief justice’s] approach toward human rights is clear and firm,” says senior lawyer and senator Aitzan Ahsan, who has presented several cases before him at the Supreme Court. “He believes the law should be implemented in its true spirit to provide justice to the common man.”