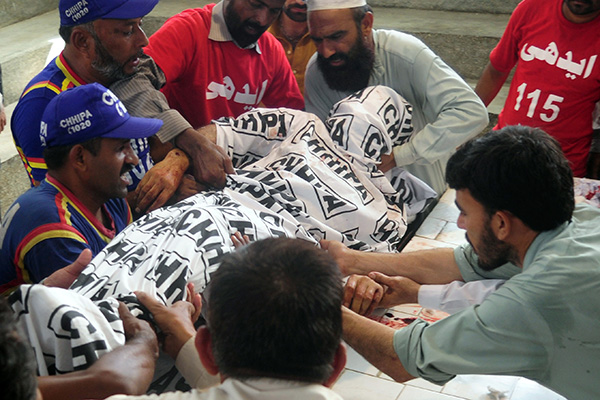 Elections in Karachi’s NA-254 constituency delayed after Saddiq Zaman Khattak and his 3-year-old son are killed by the Taliban.

A candidate running for Parliament in next week’s elections was shot dead on Friday along with his 3-year-old son after praying in a mosque in Karachi, police said.

It is the first time that a National Assembly candidate has been killed in Pakistan’s election campaign. Campaigning has been marred by Taliban threats and attacks, which have killed 62 people since April 11, according to an AFP tally.

Saddiq Zaman Khattak was a businessman and a candidate for the Awami National Party for the NA-254 constituency. A party leader said he had received threats. “He was returning from a mosque after saying his Friday prayers with his 3-year-old son when gunmen on a motorbike opened fire. Both were killed,” police spokesman Imran Shaukat said.

Karachi, a city of 18 million people, contributes 42 percent of Pakistan’s GDP but is rife with politically- and ethnically-linked violence. Friday’s assassination brings to three the number of constituencies where the May 11 elections will now be delayed because candidates have been killed.

Karachi has seen a string of attacks on the election campaign. Late Thursday, a bomb wounded at least five people near an election office for MQM, the party that dominates Karachi. Three bombs, two of which targeted MQM and the PPP, killed three people and wounded 49 others on Saturday.

In the capital Islamabad on Friday, Pakistan’s main state prosecutor in the 2007 murder of former prime minister Benazir Bhutto and the 2008 Mumbai attacks was shot dead en route to a court hearing on the Bhutto case, police said. Chaudhry Zulfiqar was shot multiple times after gunmen intercepted his vehicle after he left home. His bodyguard was also wounded and a woman passerby killed. President Asif Ali Zardari, Bhutto’s widower, condemned the killing and ordered a thorough investigation to “expose the real culprits involved in the murder,” his office said.

Former president Pervez Musharraf was this week placed under two-week house arrest over charges that he conspired to murder Bhutto. Musharraf’s government blamed the killing on Pakistani Taliban chief Baitullah Mehsud, who was killed in a U.S. drone attack in 2009.

Zulfiqar was also the main government prosecutor who indicted seven alleged conspirators in the 2008 Mumbai attacks, which killed 166 people and which were blamed on Pakistan’s Islamist group Lashkar-e-Taiba.