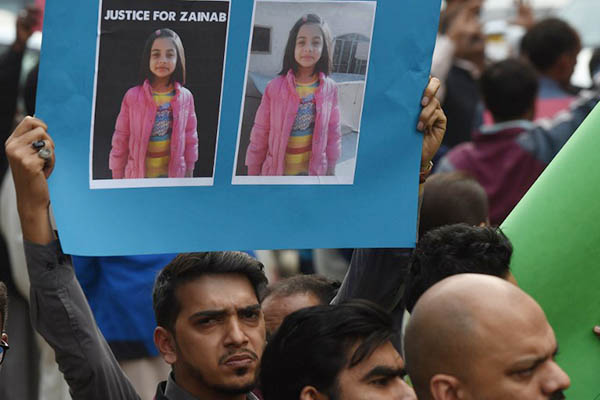 Named after Zainab Ameen, the legislation was one of six bills approved by the Lower House on Friday

Pakistan’s National Assembly on Friday passed the Zainab Alert, Response and Recovery Bill, 2019, which seeks to implement a simplified mechanism for reporting and recovering missing children.

The bill was tabled last year by Human Rights Minister Shireen Mazari, and was unanimously approved by the Standing Committee on Human Rights on Oct. 8, 2019. It was presented today on the second death anniversary of seven-year-old Zainab Ameen, who was brutally raped and murdered in January 2018.

Speaking on the occasion, Mazari thanked Planning Minister Asad Umar and Pakistan Peoples Party MNA Mahreen Razaque Bhutto for expediting the bill’s passage. Under the bill, the government aims to establish the Zainab Alert, Response and Recovery Agency for stakeholders to submit reports on missing children cases. It also seeks life imprisonment for abductors, and legal action against any police officials who delay the investigation.

Under the law, any missing children reports would prompt activation of alerts that include information on the physical characteristics of the missing child, as well as any other data that would help locate the child. The Agency would be required to coordinate with the Pakistan Telecommunications Authority to deliver alerts via mobile messaging services. There are also plans for the Pakistan Electronic Media Regulatory Authority to enable the broadcast of the alerts on television channels.

The bill seeks the establishment of nationwide toll-free hotline that would allow people to report any missing children. It also calls for an online database, maintained by both the National Commission of the Rights of the Child and the Agency, to record every reported incident of a missing or abducted child.

The bill’s eponymous Zainab was kidnapped on Jan. 4, 2018, in Kasur, and was found dead five days later. Her killer, Imran Ali, was captured after nationwide protests, with forensics proving that his DNA had also been found on seven other minor girls who had been sexually assaulted and murdered in Kasur.