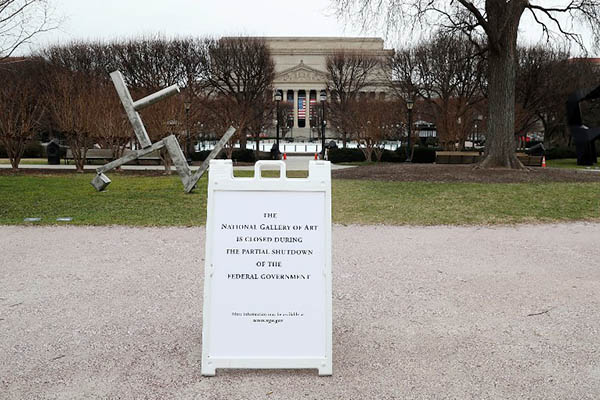 National parks that are unstaffed, long lines at airports with workers calling in sick, and assistance to the nation’s poorest threatened: the partial shutdown of the U.S. government is hitting everyday Americans and no solution is in sight.

Garbage is piling up around trashcans in national parks that lack federal employees who have been deemed non-essential and are not being paid. In some cases, volunteers have replaced them.

Unlike during previous shutdowns, some national parks have remained open even without park rangers to ensure safety. To pay employees at the most visited locations, the National Park Services has decided to dip into the budget from entrance fees, usually reserved for financing infrastructure.

The famed Smithsonian museums and the National Zoo in Washington closed to the public on Jan. 2 due to a lack of funding, though some zoo employees are still feeding the animals.

The shutdown is affecting security operations at airports, where Transportation Security Administration (TSA) employees have been deemed essential, but a growing number are calling in sick since they are not currently receiving salaries. “Call-outs began over the holiday period and have increased but are causing minimal impact … Wait times may be affected depending on the number of call-outs,” a TSA spokesperson said in a statement, adding that wait times are nonetheless “well within TSA standards.”

The poorest Americans are collateral victims of the shutdown.

Food stamps issued by the Department of Agriculture to feed 38 million people could be limited starting in February, with emergency financing covering less than two-thirds of that month, according to media reports.

The Department of Housing and Urban Development (HUD), the agency responsible for public housing, has asked 1,500 landlords to use their reserve accounts and not evict tenants unable to pay their rent.

Native American communities are also affected by the lack of funding for the Bureau of Indian Affairs, which provides basic services to nearly two million people, according to The New York Times.

Sharice Davids, a Native American member of Congress representing a district in Kansas, told National Public Radio that a Native American recently died because emergency services had been unable to intervene in time as a road was impassable due to a lack of maintenance.

Also on Monday the White House said that, even with nearly 90 percent of Internal Revenue Service staff on furlough, the Treasury would continue to release refunds for overpaid taxes, often a crucial factor in business and personal finance. A delay in the more than $100 billion in refunds paid out each February could slow economic growth.

Federal courts have funded ongoing operations from accumulated court fees, which the Justice Department said Monday could run out by Jan. 18. Some courts have stopped hearing civil cases in which the government is a party, while criminal cases continue uninterrupted. After Jan. 18, though, only critical court activities will continue.

Immigration courts—already buried under more than a million pending cases—have also continued work for migrants in detention. But all other hearings are suspended and court clerks are not working.