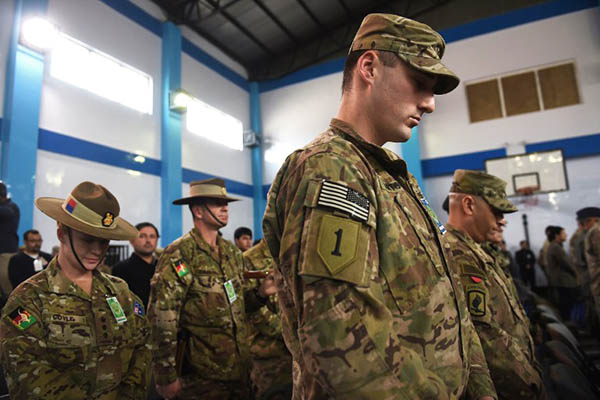 Low-key ceremony marks end of combat mission ahead of official start of ‘training and support’ mission on Jan. 1.

NATO formally ended its war in Afghanistan on Sunday, holding a low-key ceremony in Kabul after 13 years of conflict that have left the country in the grip of worsening insurgent violence.

The event was arranged in secret due to the threat of Taliban strikes in the Afghan capital, which has been hit by repeated suicide bombings and gun attacks over recent years.

“Together … we have lifted the Afghan people out of the darkness of despair and given them hope for the future,” NATO combat mission commander U.S. General John Campbell told assembled soldiers. “You’ve made Afghanistan stronger and our countries safer.”

On Jan. 1, the transatlantic alliance’s U.S.-led International Security Assistance Force (ISAF) combat mission, which has suffered 3,485 military deaths since 2001, will be replaced by a NATO “training and support” mission. About 12,500 foreign troops staying in Afghanistan will not be involved in direct fighting, but will assist the Afghan army and police in their battle against the Taliban, who ruled from 1996 until 2001.

“I hope you take great pride in the positive impact you’ve made and will continue to make upon the Afghan people,” Campbell said in a speech released by ISAF on Twitter as live broadcasts were banned for security reasons. Campbell folded up the ISAF flag and unveiled the flag of the new mission, named Resolute Support.

A new U.S. mission, Operation Freedom’s Sentinel, will focus on training, advising and assisting Afghan troops, as well as on counterterrorism. U.S. President Barack Obama praised the “milestone” end of the combat mission.

He warned, however, that “Afghanistan remains a dangerous place, and the Afghan people and their security forces continue to make tremendous sacrifices in defense of their country.” U.S. troops “will continue to face risks” in Afghanistan, Obama said, emphasizing “the enduring commitment of the United States to the Afghan people.”

Sunday’s ceremony, held in a sports hall at NATO headquarters, completed the gradual handover of responsibility to the 350,000-strong Afghan forces, who have been in charge of nationwide security since last year. But recent bloodshed has undermined claims that the insurgency is weakening and has highlighted fears that the international intervention has failed as Afghanistan faces spiraling violence.

The United Nations says that civilian casualties hit a record high in 2014, jumping by 19 percent with 3,188 civilians killed by the end of November.

Afghanistan’s police and army have also suffered a grim death toll, with fatalities soaring to more than 4,600 in the first 10 months of 2014—far higher than all ISAF deaths since 2001.

“The U.S. and NATO mission was an absolute failure as today’s ceremony shows,” Taliban spokesman Zabihullah Mujahid told AFP. “They are fleeing from Afghanistan. They have not reached their goals in defeating the Afghan mujahideen.”

U.S. and Afghan commanders insist the national security forces can hold the line against the Taliban despite concerns of a repeat of Iraq, where an American-trained army virtually collapsed in the face of a jihadist onslaught. “Our sons and daughters of ANSF (Afghan National Security Forces) are in the lead, fighting to protect security interests. God willing, they will prevail,” national security adviser Mohmmad Hanif Atmar said at the ceremony.

Since 2001, billions of dollars of aid have been spent in Afghanistan on new schools, hospitals, roads and promoting women’s rights, but corruption has been endemic and progress limited, even in the cities. This year’s presidential election, which was meant to be the keystone legacy of the development effort, was marred by fraud and a prolonged standoff between the two poll rivals that fanned further unrest.

Ashraf Ghani eventually emerged as the new president in a power-sharing deal with Abdullah Abdullah. But their “unity government” has failed to appoint any new ministers three months after taking power. Ghani hopes to bring peace to Afghanistan after decades of conflict, saying he is open to talks with any insurgent group.

Hamid Karzai, president from 2001 until 2014, opened preliminary contacts with the Taliban but they collapsed acrimoniously last year.

The U.S. will continue to provide some air support for the Afghan military, and may extend operations if required to prevent rapid Taliban advances. Recent insurgent targets in Kabul have included foreign guesthouses, diplomatic convoys and Afghan army buses.