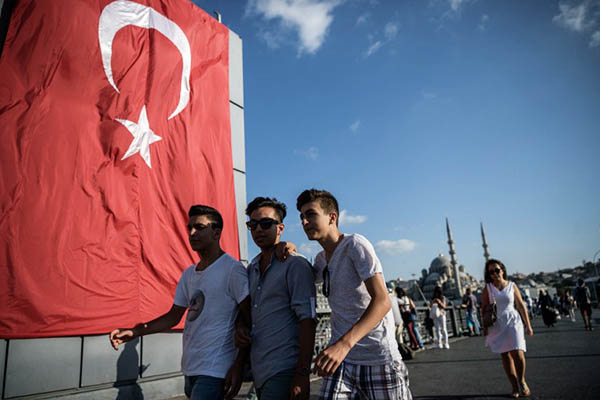 NATO said on Wednesday Turkey’s membership of the military alliance is “not in question” following the failed coup in July and stressed its “very clear position” of continued support for Ankara.

“Turkey’s NATO membership is not in question,” spokeswoman Oana Lungescu said in a statement issued in response to “speculative press reports.”

“NATO counts on the continued contributions of Turkey and Turkey can count on the solidarity and support of NATO,” Lungescu said.

The statement comes the day after Turkish President Recep Tayyip Erdogan made a highly symbolic visit to Russia to mend fences with Moscow, sparking speculation that Ankara’s close ties with the West could be at risk. In Ankara, Turkish Foreign Minister Mevlut Cavusoglu insisted the Russian visit had no wider agenda but did warn of the possible consequences if relations with Europe did not improve.

“Our relations with Russia are not a message to the West. We worked very hard to have good relations with Europe for 15 years,” Cavusoglu said, as he blasted the European Union for having “encouraged the putschists.”

“If the West one day loses Turkey—whatever our relations with Russia and China—it will be their fault,” he said.

The Russian media on Wednesday hailed Putin’s meeting with Erdogan as a major breakthrough, with past grievances forgotten in the interests of building new ties. Early last month, NATO leaders including Erdogan had endorsed the alliance’s largest military revamp since the end of the Cold War to counter a more assertive Russia in the fallout from the Ukraine crisis.

Turkey is NATO’s second largest military power after the United States and is a crucial ally as the West faces unprecedented conflict and upheaval across the Middle East. In November, Turkish aircraft shot down a Russian fighter jet along the border with Syria, sparking a crisis in ties with Moscow and strong expressions of support from NATO.

Recent reports in the Turkish media, picked up and amplified by the Russian press, have blasted Turkey’s allies for their lukewarm condemnation of the coup attempt and suggested that they may even have had a hand in it.

Erdogan has sharply criticized the United States and the E.U. for not doing more to show support in the aftermath of the abortive putsch. He has also bristled at their warnings that he should not undermine human rights and democratic norms in the subsequent crackdown, which has netted thousands of people.

In the NATO statement, Lungescu recalled that alliance chief Jens Stoltenberg had telephoned Erdogan in the immediate aftermath of the putsch “strongly condemning the attempted coup and reiterating full support for Turkey’s democratic institutions.”

“He expressed support for the elected government of Turkey and respect for the courage of the Turkish people,” she noted. “He also conveyed his condolences for those who had lost their lives during the coup attempt.”