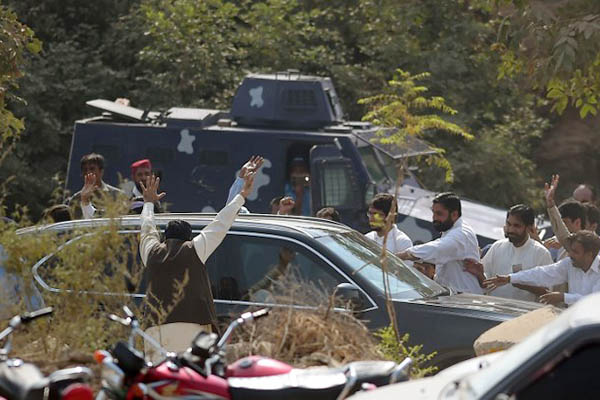 Sacked prime minister Nawaz Sharif made a second appearance before an anti-corruption court on Monday, as officials said he would be indicted at a later hearing on corruption charges that could ultimately see him jailed.

A helicopter hovered over the Islamabad court and supporters chanted slogans from behind security barriers as Sharif arrived in a convoy of BMW SUVs, escorted by elite police guards. Media along with many lawyers and officials—including Interior Minister Ahsan Iqbal—were prevented from entering the court, with security forces forming a human barrier as the former premier entered.

Sharif left again just over an hour and a half later without making any statement. Officials said the case had been adjourned until Oct. 9, with no confirmation when the indictment might take place.

Sharif’s sons Hussain and Hassan and his daughter Maryam have also been named in the case and are currently in London with their mother Kulsoom, who is receiving treatment for throat cancer.

A court official told media that Sharif would be indicted “when all accused are present in the court,” though another senior official suggested later that if his children do not appear then his case could be tried separately.

Mohsin Ranjha, a leader of Sharif’s ruling Pakistan Muslim League (Nawaz) party who spoke to reporters outside the court, said they were willing to return and appear before it. He did not say when.

Iqbal threatened to resign after he was blocked from the court, expressing fury that security forces under his authority appeared to have defied his orders and calling for the court process to be fully transparent. “I can’t be a puppet interior minister … There can’t be two states in one state,” he said, alluding to Pakistan’s military establishment, which has long clashed with Sharif and vied for power with the civilian government.

The Supreme Court deposed Sharif in July following an investigation into corruption allegations against him and his family, making him the 15th prime minister in Pakistan’s 70-year history to be ousted before completing a full term. The Supreme Court also banned him from holding public office and ordered the country’s anti-corruption watchdog, the National Accountability Bureau, to open a criminal case against him and his children, which could see him facing imprisonment.

Sharif has faced such challenges before. In 1993 he was sacked from his first term as prime minister for corruption, while in 1999 he was sentenced by a military court to life in prison after his second term in office ended in an army coup. On that occasion he was allowed to go into exile in Saudi Arabia, returning in 2007 before winning the premiership for a third time in 2013.

Sharif made his first appearance before the anti-corruption court last week. He later held a press conference in which he vowed a landslide win for his ruling party in general elections due by the end of next year, and insisted he was seen as innocent in the court of public opinion.

Last month his wife Kulsoom won his former parliamentary seat during a by-election in Lahore, in a poll seen as a test of the ruling party’s popularity after his ousting.

Every body is equal before law. There should be no protocol to an accused. Their party is playing with Pakistan.