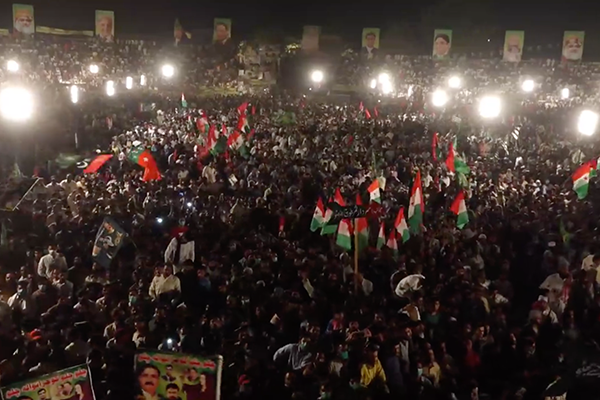 At PDM’s inaugural rally, former prime minister names and shames, and calls on the public to fight for their mandate

The united opposition’s Pakistan Democratic Movement (PDM) staged its inaugural rally in Gujranwala on Friday, with leaders of all 11 allied political parties vowing to dislodge the incumbent government, and demanding free and fair elections.

The first public meeting of the PDM started much later than initially scheduled due to its top leadership getting waylaid by traffic and enthusiastic supporters en route. Despite this, Jinnah Stadium remained packed throughout the day, with thousands in attendance as people came out to protest rampant inflation and join the opposition’s calls for an end to the Imran Khan-led incumbent.

Sensing the public’s mood, PDM leaders termed the rally a “public referendum” against the “selected” Imran Khan, and demanded the “selector” to cease their interference in the people’s mandate. Taking the lead, PMLN leader Nawaz Sharif addressed the gathering via video-link from London—his address was not broadcast on any TV channel due to PEMRA restrictions—reiterating his all-parties’ conference stance to change the system, and bring an end to the security establishment’s interference in the political process.

“How do people earning Rs. 20,000/month or less make their ends meet right now?” he asked the audience, lamenting that the ‘selected’ PTI government had destroyed the country’s economy and left people having to choose between eating or paying their bills. He also hit out skyrocketing costs of medicines, noting that his government had sought to provide free healthcare but the incumbent government had raised prices across the board.

In a startling revelation, Sharif alleged that the incumbent Army and ISI chiefs had plotted to end his government and rigged the general elections to install “incompetent” Khan. “They must answer for this!” he said to cheers from the crowd and called on the establishment to respect the people’s mandate and let them choose their own leaders. Sharif maintained that he had no fight with the country’s institutions, urging the audience to join him in paying respect to the soldiers of the Pakistan Army who were fighting on borders and mountaintops, and performing their duties as per the Constitution of Pakistan. “They are our true heroes,” he added. 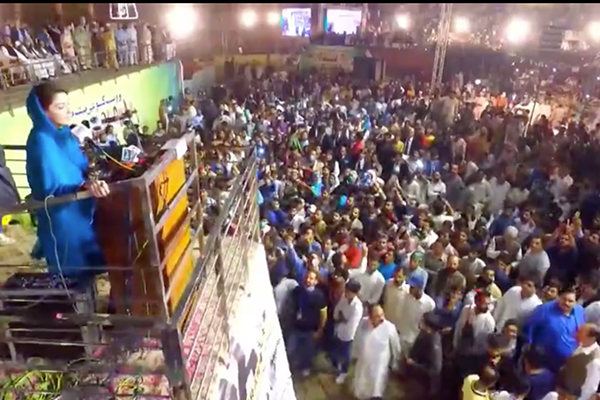 PMLN Vice-President Maryam Nawaz, Sharif’s daughter, followed his thunderous speech by reiterating calls for the establishment to respect the people’s mandate. Speaking in Punjabi, she said that it was Imran Khan who would not get any ‘NRO’—referring to the prime minister’s repeated claims that the opposition is only seeking amnesty for its alleged crimes.

Slamming those who had called the Sharif family a “Sicilian mafia,” Maryam said it was now clear who was the actual mafia—the ones who were profiting off wheat and sugar shortages. “Imran had imposed curbs on media and once it would be free his corruption stories would come out,” she said, and questioned why Asim Bajwa continued to enjoy immunity from any questions about his family’s finances. “This corrupt man has the important slot of CPEC [Authority chairman],” she said.

No one but the public should hold politicians accountable, said Maryam, adding that she was attending the rally not to demand relief for her father, but rather to publicize the public’s plight under rampant inflation. “I want to highlight the protests in Islamabad this past week,” she said, specifically citing the ongoing lady health workers’ sit-in for higher salaries and regularization of contracts.

During his turn at the podium, the Pakistan Peoples Party chairman claimed Imran Khan’s sole solution to the problems facing the nation was his ‘Tiger Force.’ Accusing the prime minister and his cabinet of breaking “all records of corruption,” he questioned why no one was willing to look into allegations that the PTI had been funded by Israel and India.

Bhutto-Zardari also slammed the ‘incompetent Niazi’ for failing to united the Muslim world for Kashmir, noting PPP founder Zulfikar Ali Bhutto had united the ummah in Lahore for the OIC.

Criticizing a recent statement of Khan, in which he termed himself ‘democracy,’ the PPP leader said that Khan was merely “a puppet and selected.” He said the selectors must realize their machinations are harming the country and vowed that Pakistan would become a truly democratic state at all costs.

The Jamiat Ulema-e-Islam (Fazl) chief was the last of the PDM’s top leadership to reach the venue. In his address, he vowed that a rising tiding of people would oust the ‘fake’ government. “In coming days the fake rulers will meet their fate,” he promised, claiming that the incumbents would be out of power by December.

Referring to Nawaz Sharif’s speech, he also questioned why politicians had been directed to not take the selector’s name. “They will be exposed,” he promised, alleging they had attempted to “slaughter democracy” in public and imposed a puppet against the wishes of the people. He also said that the PDM did not consider the incumbents a genuinely-elected Parliament.

Appearing in various TV shows, government ministers sought to downplay the rally, claiming it was a “small crowd” for 11 political parties to pull off. Despite these claims, pictures and videos of the rally made it clear to the public that calls for Khan’s ouster have taken hold of public imagination; the stadium echoed with shouts of ‘Go Niazi Go’ every time a speaker took the rostrum.

In addition to the top leaders, the rally was also addressed by senior leaders of all major opposition parties, including the Awami National Party and the Balochistan Awami Party.