Home Elections 2013 Nawaz Sharif Confident of Landslide on May 11

Nawaz Sharif Confident of Landslide on May 11 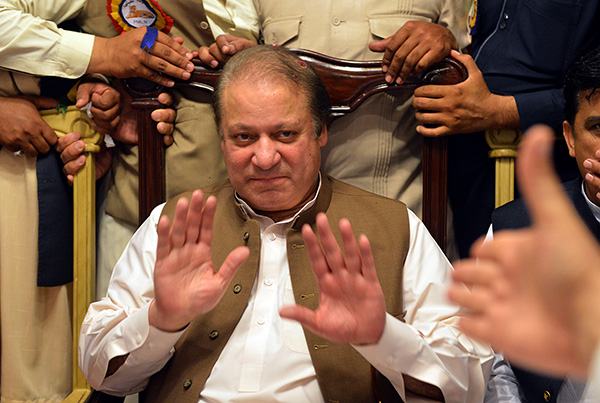 PMLN chief stresses PPP’s failure, his own economic credentials as he campaigns for general elections.

Thirteen years ago Nawaz Sharif was sentenced to life in prison. Today he is confident of winning a historic third term at Pakistan’s general elections and fixing the country’s most intractable problems.

Calm and collected at the end of a quick visit to Islamabad, where he addressed a hot and sweaty hotel meeting room packed with businessmen, the 63-year-old former prime minister presents himself as a statesman-in-waiting. “Our people are very excited. They are waiting for a response from the field and things look good. They, in fact, look better than what they were in 1997,” he said, referring to the landslide that last swept him into power.

Businessmen and industrialists traditionally regard Sharif’s Pakistan Muslim League (Nawaz) party as better on the economy than the outgoing Pakistan Peoples Party, and he comes back, time and again, to stressing his economic credentials for the May 11 elections.

He won admiration for turning Pakistan into a nuclear power in 1998 and for building a high-speed motorway from Peshawar to Lahore, his hometown and Pakistan’s cultural capital on the Indian border. In the early 1990s he privatized much of the industry that the PPP had nationalized.

He said he would forge a national consensus to fix Pakistan’s crippling power crisis and repair its faltering economy, albeit without mentioning any details that might expose the limits of his promises. “The problems of this country are gigantic. You’ve got to fix the problem of power, that should be the first priority. It needs a lot of resources, hard work and the right policy,” Sharif said in the VIP lounge of Islamabad airport.

“About three to five years” is all that is required, he says, to fix the energy shortages that hammer businesses and make life a misery for millions. Pakistan does not produce enough power to meet demand, and the government routinely fails to pay for the electricity it does consume. Power companies in turn cannot pay their own bills, and so supply cuts out.

But for all his promises of rapid and effective change, Sharif is no stranger to allegations of incompetence and graft.

He was first elected in 1990 but sacked three years later on corruption charges. His second term from 1997 to 1999 ended in a military coup by Gen. Pervez Musharraf, which the public widely welcomed at the time.

Thirteen years after Sharif was sentenced to life in prison for hijacking, attempted murder and other charges, he says he forgives Musharraf, who now languishes under house arrest after a spell in self-imposed exile.

The interim government last month refused to put Musharraf on trial for treason, saying it was up only to the next elected administration. But Sharif ducked a question when asked what he would do. “It’s up to the courts … I’ve no personal vendetta against General Musharraf. If there was, I forgive,” he said as he prepared to board a private jet to address a campaign rally in his political heartland, Punjab.

Sharif has been criticized for being soft on Islamist militant groups. Asked about Taliban attacks targeting parties in the outgoing government, he stopped short of condemning the insurgents by name. “Well it’s very unfortunate. I’ve extended my sympathies and condolences to all these people and I appreciate their statement that no matter what, elections must be held on time,” he said.

Like cricket legend Imran Khan, the only other party leader to address major rallies on a daily basis, Sharif has refused to shield himself behind bulletproof glass when addressing the crowds. “The danger is there and one cannot ignore that. But in order to establish eye-to-eye contact with the people, to have that kind of communication with the people, I think it is necessary there is no barrier,” he said.

He also bats aside perceptions that he and his conservative PMLN party are less trusted in Western capitals than the PPP. “We had very good relations with everybody in the world and Pakistan was progressing, Pakistan’s economy was thriving. We were No. 1 in fact, what I want to say is we were the leading nation in South Asia,” he said.

Analysts consider the only bar to a Sharif premiership to be Khan, whose call for change and reform has resonated with the urban middle class despite the fact that he has previously only won one seat in Parliament.

PMLN is likely to get 60-70 NA seats from Punjab while PTI would get 30-40. PPP would most likely end up with 20-30. The rest of 148 NA seats from Punjab will go to miscellaenous parties. There is no chance of PMLN or PTI sweeping in Punjab. Out of 272 NA seats, 148 belong to Punjab. PTI would be in lead in KPK and PPP in Sindh. Balochistan will again have mushrooms. PMLN is nowhere to be seen in other provinces. So, PMLN or PTI cannot claim to be sweeping the elections on the national level. Imran Khan will, of course, emerge as a king maker and possibly Leader of the Opposition in the National Assembly. The worst hit will be the PPP and the PMLQ. With this scenario, mid-term elections after two to three years cannot be ruled out.