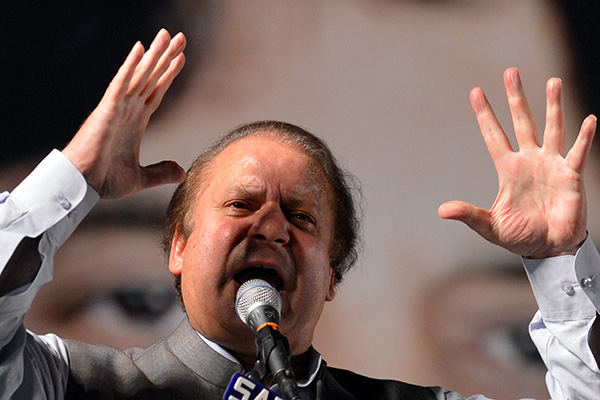 Sharif’s party has a solid majority in the 342-strong National Assembly, which elects the prime minister. Sharif, a former two-time prime minister, secured 244 votes to Pakistan Peoples Party candidate Makhdoom Amin Fahim’s 42 and Pakistan Tehreek-e-Insaf’s 31. His bid was supported by the Jamaat-e-Islami and the Qaumi Watan Party (Sherpao), which are both part of the PTI-led coalition government in Khyber-Pakhtunkhwa.

Speaking in the National Assembly after the vote, Prime Minister Sharif urged unity and said he needed the support of all political parties in Parliament to solve the country’s several immediate challenges, including power outages and terrorism. He thanked voters for stepping out on May 11 to make their voices heard and said Pakistan had demonstrated that it believes only democracy is the path forward. Sharif said this was the first time that the “true leadership” of Balochistan would be governing the troubled province.

Sharif stressed the importance of deeper economic ties with China, unveiling a plan to create a road and rail network for Chinese exports to reach the ports of Gwadar and Karachi. He said Pakistan must address the concerns of other countries, but that its concerns must also be heard. “This daily business of drones must finish,” he said to applause.

Sharif has been sworn in by President Asif Ali Zardari. Shahbaz Sharif, his brother, will be sworn in as chief minister of the Punjab tomorrow.

In his concession speech, PPP’s Fahim spoke of the successes of his party’s government, his own refusal to leave the PPP despite inducements, and, suggesting widespread rigging in the May 11 elections, said “congratulations” were also owed to the “agencies” of the military establishment. Sharif did not react to this provocation.

Sharif, 63, entered politics as a protégé of then-president Gen. Zia-ul-Haq. He served as prime minister from 1990 to 1993 and again from 1997 to 1999, when his government was ousted by the Army. Sharif was jailed for 14 months, convicted on several counts, and eventually allowed to proceed into exile after the intervention of Saudi Arabia and Lebanon. Sharif returned from exile just weeks ahead of the 2008 general elections.

The man who led the coup against Sharif’s last government, former president and Army chief Pervez Musharraf, remains under house arrest in Islamabad.

Political analyst Talat Masood says Sharif is a different man from the hothead of the 1990s who riled Pakistan’s powerful military. “I personally think that he has gained a lot in these last several years. He is a far more mature politician, he has understood the dynamics of the civil-military relationship,” says Masood. “He is a much more mature, balanced, and experienced third-time prime minister.”

Sharif has been seen as a pragmatist in the West, but raised eyebrows by calling for peace talks with the Pakistani Taliban, blamed for killing thousands of Pakistanis in the past six years.