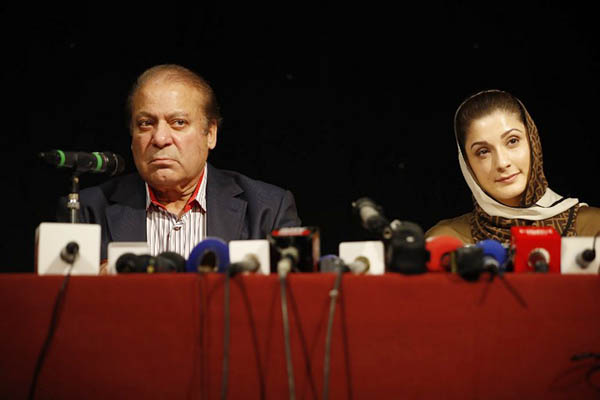 Former prime minister Nawaz Sharif on Wednesday said he would return to Pakistan this week despite being sentenced in absentia to 10 years in prison by a corruption court there.

“Despite seeing the bars of prison in front of my eyes, I am going to Pakistan,” he told a conference of his Pakistan Muslim League (Nawaz) party in London. “Put Nawaz Sharif in prison for life, send him to the gallows but you will have to answer the questions that the people of Pakistan are asking and they will stop only after getting answers,” he said to cheering from supporters.

Sharif also alluded to the power of Pakistan’s security establishment, saying: “There was a time when we used to say a state within a state, now it’s a state above the state.”

At the conference, held in the ballroom of the Grosvenor House hotel in central London’s plush Mayfair district, one man held a placard reading: “Leave democracy alone.” Attendees chanted “Nawaz Sharif, We Love You!” as he concluded his speech.

Sharif was sentenced by a court in Islamabad last week over the purchase of high-end properties in London. He was ousted from his third term as prime minister by the Supreme Court last year following a corruption investigation and banned from politics for life but remains a powerful symbol for his ruling party.

Usman Khan, PMLN’s coordinator in Britain, told AFP that Sharif’s case “was manipulated by the judiciary and the establishment in Pakistan.”

Khan said Sharif would leave London on Thursday and arrive in Lahore in Pakistan at around 0600 or 0700 GMT. “We are expecting a large crowd to welcome him,” he said.

Khan said he hoped Sharif would be allowed to speak to his supporters in Pakistan “before he surrenders himself to the authorities.”