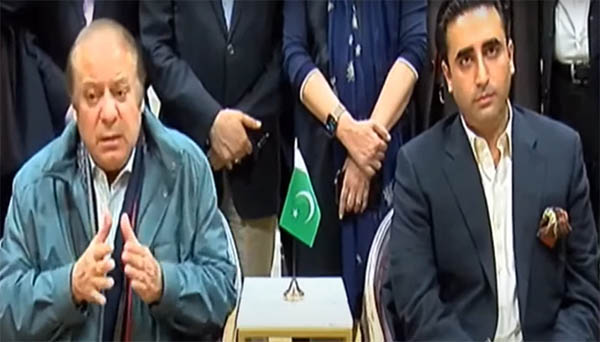 Pakistan Muslim League (Nawaz) leader Nawaz Sharif on Thursday slammed ousted prime minister Imran Khan for blaming his ouster through a vote of no-confidence on a “foreign conspiracy,” claiming that the PTI chairman had “destroyed” Pakistan’s economy and that alone was responsible for his dismissal.

“Were you involved in atomic blasts? Why would there be a foreign conspiracy against you?” he said during a joint press conference with Pakistan Peoples Party Chairman Bilawal Bhutto-Zardari from London. Stressing that the country’s economy had been moving in the right direction during the PMLN’s tenure of 2013-2018, Sharif claimed all those gains had been reversed and ousting Khan was the only way to ensure the country could progress once more.

The former prime minister—who was disqualified by the Supreme Court in 2017—claimed the Pakistan Tehreek-e-Insaf (PTI) had fostered one of the most hostile political environments ever seen in Pakistan. “Khan promoted the culture of hooliganism and immorality,” he claimed, and called for joint efforts from all political parties to resolve the country’s issues.

“We need to work together as Pakistan saw the worst of times during the four years that Imran Khan was in power,” he said. “He [Khan] took u-turns on everything and always did the opposite of what he vowed to,” he said, adding that the PTI chairman had once claimed he would sooner take his own life before approaching the International Monetary Fund (IMF) for financial support. “But we did not see him take his own life till now,” he said, referring to the Extended Fund Facility the PTI-led government entered with the global lender to shore up the country’s economy.

“We are all patriotic Pakistanis and Pakistaniat runs in our blood and veins. We feel sorry for the current state of Pakistan,” the PMLN leader said, claiming that the country’s international reputation had been “destroyed.” The PTI’s rule has been the darkest chapter in the history of Pakistan, he said, vowing to “repair our country through national consensus.”

Recalling that he had been Pakistan’s prime minister thrice, Sharif said his utmost desire was for the country to move toward stability and progress. Thanking the PPP chairman for visiting him in London, he said the two would meet again on Friday afternoon—but gave no further details of the meeting.

In his statement to media, Bilawal said Khan’s ouster as prime minister was “historical,” adding that the PPP and PMLN had made similar history together in the past when they inked the Charter of Democracy. He said it had taken nearly four years for the joint opposition to end the rule of the “selected government” in a constitutional way through a no-confidence motion. “We did not involve judiciary or any other institution to remove Imran Khan from power,” he said. “We took a democratic step against the P.M., who was sitting in the prime minister’s chair undemocratically,” he added.

“Every other Prime Minister of Pakistan was removed through undemocratic means but only Imran Khan was removed through a democratic no-confidence vote,” he said, adding that a non-democratic “selected” system was imposed on Pakistan and luckily they had been able to oust it. “We took no undemocratic step against him. We used the power of the Parliament. Pakistan is at a crossroads today. We can either move towards democratic progress or we can go into reverse gear. Together we can achieve so much for Pakistan,” he added.

Stressing that the incumbent government had been formed at a time of “national crisis,” he stressed that it was a “consensus” setup. He said the new generation of Pakistan would use the experience and guidance of elders such as Nawaz Sharif and Asif Ali Zardari to face and overcome the daunting challenges facing Pakistan.