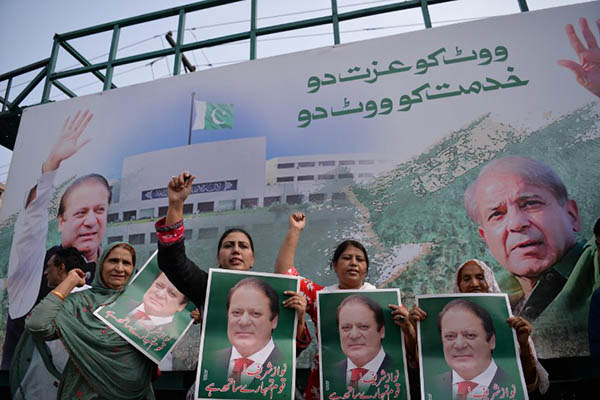 Authorities locked down parts of Lahore on Friday ahead of the return from London of former premier Nawaz Sharif, who faces possible arrest and a 10-year prison sentence ahead of already tense elections his party insists are being rigged.

Sharif was sentenced in absentia last week to 10 years in prison by a corruption court over the purchase of high-end properties in London, dealing a serious blow to his Pakistan Muslim League (Nawaz) party’s bid weeks ahead of the July 25 polls.

He has claimed he is being targeted by the military. “I know that… I will be directly taken to jail,” he said in a video released by his party on Friday. “I want to tell Pakistanis I have been doing this for you… Walk with me, join hands with me and change the destination of the country.”

AFP could not immediately confirm the production date of the video, which showed Sharif seated on a plane.

On Thursday, his brother Shahbaz Sharif, who now heads the PMLN, said that hundreds of their workers and supporters had been arrested ahead of Nawaz’s expected return in what he said was “naked” pre-poll rigging against their party.

The younger Sharif has pledged to marshal a welcome for the former prime minister, saying thousands of supporters would travel to Lahore airport to back Nawaz. “The whole world knows that PMLN is being targeted,” Shahbaz said. “We’ll go to the airport tomorrow despite this brutality, and we will remain completely peaceful.”

Containers could be seen blocking some Lahore roads on Friday morning, while travel to and from the airport had reportedly been restricted.

Authorities have pinpointed at least 50 locations in the city to block if needed, according to a police official, who requested anonymity as he was not authorized to speak to the media.

Despite the crackdown, PMLN backers continued to flock to the city, vowing to confront authorities if challenged. “We are going to airport and if anybody stops us then we are ready to go to jail,” Khurram Ehsan, 36, told AFP. “We can go beyond our limits for our leader.”

Nawaz left London late on Thursday where his wife is being treated for cancer.

Pakistan’s election will pit the PMLN against its main rival, the Pakistan Tehreek-e-Insaf, which is led by cricket star-turned-politician Imran Khan. The polls would be only the second-ever democratic transfer of power in the country.

Nawaz was the 15th prime minister in Pakistan’s 70-year history—roughly half of it under military rule—to be removed before completing a full term.

The military remains the most powerful institution in the country, and has faced blistering allegations in recent months that it is pressuring the media and politicians in a bid to manipulate the polls against the PMLN.

The armed forces have denied the accusations, and said it has “no direct role” in the elections.

He should go to jail for forever Not 10years