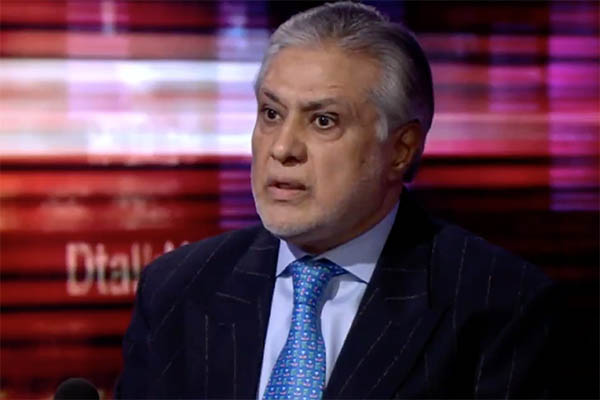 In interview, former finance minister claims he only owns one property in Pakistan

Pakistan Muslim League (Nawaz) supremo Nawaz Sharif’s criticism of the security establishment’s interference in the political process is not “hypocrisy,” but rather an “evolution,” former finance minister Ishaq Dar has claimed.

Appearing on BBC’s HARDTalk, he responded to a question by interviewer Stephen Sackur on whether Sharif’s accusations of the military interfering in politics now that he was out of power was “hypocrisy,” by claiming this was part of an “evolution” process. He claimed even Khan’s own interior minister had told “the whole world that Sharif would’ve been prime minister for the fourth time if he had not gotten in trouble with the establishment.”

Dar claimed that Sharif was not “anti-military” and had blamed certain individuals for interfering in the 2018 general elections. “If Mr. Sharif talks of certain interventions that are against the oath and Constitution of Pakistan, how is it wrong?” he said.

To a question, the former finance minister claimed the judgments in the cases in which Sharif had been convicted maintained “the prosecution has not been able to prove any corruption, any kickback, any loss to the exchequer.” To this, Sackur countered: “I’m sorry sir, but it is quite clear that he is a convicted criminal … And now, you and he put yourself forward as leading voices in the opposition in Pakistan, demanding early elections and an end to Imran Khan’s government and I ask you, what credibility do you think you have with the Pakistani people?”

Dar hit back by questioning the credibility of the Pakistan Tehreek-e-Insaf-led government. “The world has witnessed that it was a stolen election; it was a rigged election,” he said, adding that independent observers had found the 2018 polls to be among Pakistan’s “dirtiest.”

During the interview, Dar sought to clarify that the military as an institution was not to blame for allegedly manipulating the 2018 elections. “It’s a reality. The buck stops at the top and the deep state is known [to do this] in Pakistan,” he said, adding that the alleged campaign against Sharif had begun with the ‘Dawn leaks’ controversy.

“It’s not the military, we have to talk about individuals. It is not the entire institution. Let’s create a difference. The wish list is a plan of certain people who enforce in Pakistan lots of laws,” he said, adding that the opposition’s ongoing movement was aimed at saving the country.

He reiterated the PMLN’s claims of bringing down inflation, and raising the GDP in its last tenure, and claimed Pakistan had been set to join the G20 group by 2030. However, he said, this was rubbished within two years by the PTI, which he claimed had “ruined” the economy, resulting in negative GDP growth for the first time since 1952.

Dar claimed that he only owned a single property—his residence—in all of Pakistan, and denied allegations of owning property abroad. “It’s all declared in my tax returns,” he told Sackur to a question on just how many properties he and his family owned. “I have my main residence in Pakistan, which has been taken over by this regime. I haven’t got too many properties,” he said, adding that his independent sons—having been in business for 17 years—owned a villa in Dubai.

To another question, the former finance minister claimed he was in London for medical treatment and could not return to face the charges against him in court. “Are you still really suffering?” Sackur asked. “Yes, I am,” Dar, who has been in Britain for around three years, responded. “And you couldn’t possibly get back to Pakistan?” Sackur continued. “Well let’s see what’s happening in Pakistan,” Dar said. “Where are the human rights; What is happening in NAB [National Accountability Bureau] custody, where dozens of people have been virtually killed. There are human rights abuses,” he added.

To a question on whether he was in the U.K. to “escape” legal proceedings, Dar claimed he had the evidence to clear his name, but could not provide it in Pakistan because of alleged suppression.

“The corruption rhetoric has been used in the last few dictatorships and the current one isn’t different because this regime is known to be under a covert coup or a judicial martial law. I can prove that there’s nothing against me,” he said, claiming NAB’s findings of his assets-beyond-means were inaccurate. He said the primary allegations against him were based on him not filing tax returns in Pakistan for 20 years—an assertion he strongly denied.

“If my net worth is documented in my tax returns and my tax returns are not missing … what is the issue? The issue is something different, because Sharif was fighting for civil supremacy and I have always been fighting for financial and fiscal discipline and transparency,” he claimed.

Terming “supremacy of democracy and free and fair elections” as the ultimate goal of the PMLN’s current unrest, Dar claimed he was ready to return home and face the law—once all institutions started working within their prescribed domains.

The Supreme Court of Pakistan declared Dar an absconder in 2017 while he was in London, reportedly undergoing medical treatment. In May 2018, the top court suspended Dar’s Senate membership.

Government lawmakers have reacted to the interview—in which Dar can often be seen getting flustered at Sackur’s questioning—as evidence of the PMLN’s malfeasance. Industries Minister Hammad Azhar said on Twitter the interview had “exposed [Dar] for the umpteenth time.” He added: “He is best known for figure fudging and cuckoo economics. But now he’ll also be remembered for this interview.”

Maritime Affairs Minister Ali Haider Zaidi said: “Thank you [Stephen Sackur] for exposing this absconding money launderer who masqueraded as a politician in Pakistan and is now seeking political asylum in the U.K.!”