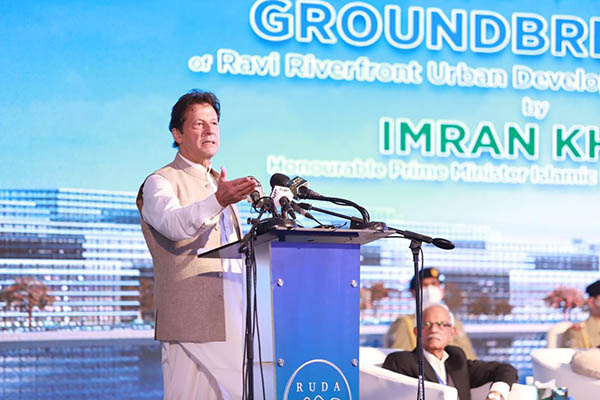 Naya Pakistan is not a country beset by calamities and inflation, but rather one that will slowly emerge through ongoing uplift efforts, Prime Minister Imran Khan said on Tuesday.

Addressing the inaugural ceremony of the Ravi Riverfront Urban Project in Lahore, he complained that journalists would interview the common man every few months and ask them their opinions of the Naya Pakistan promised by the Pakistan Tehreek-e-Insaf. “When you ask people stuck in a calamity like the recent urban flooding at Karachi how they find Naya Pakistan, how are they expected to respond? Of course, they bemoan price hike, unemployment,” he said while chuckling. “All these troubles are then linked to Naya Pakistan,” he added.

“That is not Naya Pakistan. Rather, it is what I personally aspire for,” he said. “An old adage advises: don’t judge people on what they have achieved, but on what they aspire for. All big leaders around the world, who transformed their societies, succeeded not because of any special education or other particular human faculties but only because they dreamed big,” he said, adding that the PTI was “dreaming big” for Pakistan and success lay in following one’s dreams.

Claiming that the Ravi Riverfront project had failed to take off earlier because previous governments had focused on their own interests rather than the common man, Khan said his vision for Naya Pakistan was in line with the Riyasat-e-Madina and would be built on compassion. “China became a modern day example of the same when it lifted 700 million out of poverty—an inspiration for Pakistan,” he said.

The prime minister said his government had launched the panah gahs (shelter homes) for the impoverished already, adding the next step was to set standards for them. In this regard, he said, the government had also decided to require all future housing schemes to include subsidized homes for the poor.

“We have introduced a Rs. 30 billion package for subsidized housing. We will offer a 5% interest rate on loans from banks. For the first time the low-salaried and poor segments of society will have the opportunity to buy their own home,” he claimed, adding this would include housing in the Ravi project.

Referring to the Ehsaas Program, Khan said that Rs. 200 billion had been earmarked for cheap loans, skill development programs, scholarships and animal farming in villages, as well as programs to address stunting in children.

The prime minister noted that unplanned construction in Lahore was quickly depleting the city’s groundwater levels, claiming the Ravi waterfront project would help stem this. He said the government would pump treated water into the Ravi river, and lead to its rejuvenation.

Khan also assured the project his government’s full support, saying it was in the national interest. He said the project would be primarily funded through public-private partnership and urged investors to fund it. “The biggest contribution will be made through our greatest asset—our overseas Pakistanis,” he added.