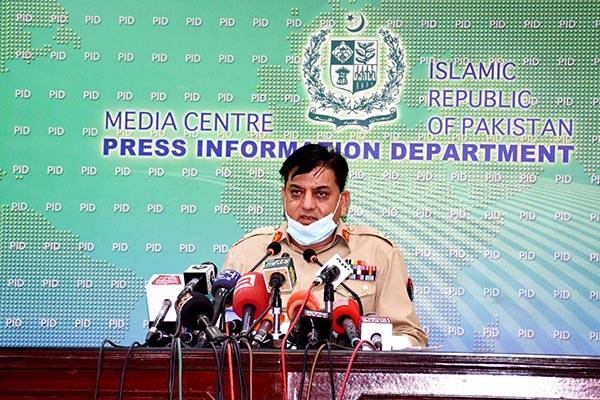 Addressing a press conference in Islamabad, he said that the focus would be on “disaster mitigation,” adding that three major spells of rainfall were predicted for the month of August: Aug. 7-Aug. 10; Aug. 15; and Aug. 24-Aug. 26.

“At least 80mm of rainfall was recorded in one hour in some areas of Karachi during the past few days,” he said, noting this had completely overwhelmed the city’s drainage system “which is already working well beyond its capacity.” He said that the Pakistan Army’s V Corps had been deployed under the Disaster Management Act, adding the clean-up operation would comprise two phases.

In the first phase, according to Afzal, the NDMA would focus on reducing the damage already caused to various parts of the city. “But Karachi’s problems can’t and won’t be solved by this. For that, we need to understand the problems of the city,” he said, referring to the city’s solid waste management.

He also slammed the encroachments in the city that had blocked several natural drains, adding that one of the reasons for poor drainage in the city was that it did not have separate storm water and sewerage drainage systems. “Even if the sewerage system is separate in some areas … you can’t put that water into the [drainage] without treating it,” he said. “If you don’t treat sewerage, heavy sediments will begin to settle and that system will [collapse] in two to three years,” he added.

After the mitigating phase was completed—hopefully by September—the NDMA would commence the second phase under which all stakeholders would be brought on board to create consensus to evolve a permanent solution, said Afzal, warning that if this work was not done, any efforts for improvement would be temporary.

The NDMA chief also discussed the country’s COVID-19 situation, saying the government’s efforts had resulted in reducing new infections and deaths due to the disease. Urging the public to continue its adoption of standard operating procedure to contain the spread of COVID-19, he said the government had added 3,000 oxygenated beds and there was a sufficient quantity of ventilators available in storage. He said the NDMA also had over 700,000 pieces of personal protective equipment in stock, and claimed 141 laboratories have had the capacity to test for COVID.