Nearly 360 Hurt in Turkey By Quake 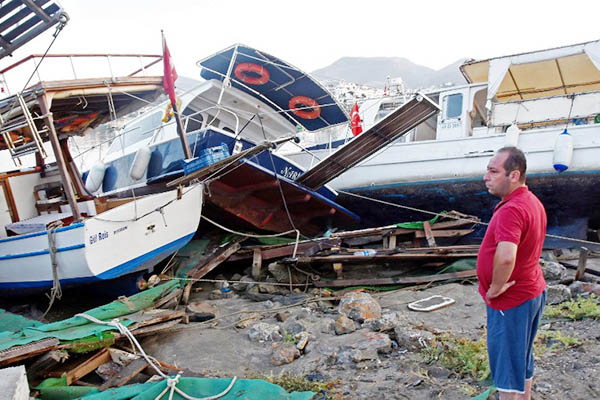 Health minister says there were no serious injuries after 6.7-magnitude tremors

Almost 360 people were hurt in the Turkish resort of Bodrum after a magnitude 6.7 earthquake shook Greece and Turkey’s Aegean coast, the Turkish health minister said on Friday.

Ahmet Demircan said 358 people were hurt, of whom 272 were taken to hospital in ambulances. The rest went on their own, he said. Of the victims, 25 remained in hospital, the health minister said, adding that some had broken bones. But there were no serious injuries.

Many of the injuries were caused by people jumping out of building windows and falling after reacting in panic to the overnight quake, NTV broadcaster said. The wounded were being treated in the garden of the hospital in Bodrum as the quake caused slight damage to the hospital’s ceiling, Bodrum district governor Bekir Yilmaz said, quoted by Hurriyet daily.

Yilmaz expressed relief there had been no loss of life or anyone seriously injured by the quake on Turkish territory. A Swede and a Turk were killed on the Greek island of Kos.

The Turkish foreign ministry said its consulate on the Greek island of Rhodes had confirmed the death of the Turkish citizen and was trying to contact the family. The consulate added that one other Turkish citizen has been seriously injured and taken to Athens.

A ferry has also been sent to evacuate 200 Turkish nationals from Kos back to Bodrum. CNN Turk broadcaster and other local media said the evacuations had begun.

The epicenter of the quake was approximately 10.3 kilometers south of the southwestern resort, a magnet for holidaymakers in the summer, and 16.2 kilometers east of the island of Kos in Greece, the U.S. Geological Survey said.

NTV television said the quake triggered a mini tsunami off the coast of Bodrum, with cars in the resort of Gumbet just outside Bodrum town damaged by the incoming waves that flooded onto roads. Images showed boats had suffered damaged after being pushed up against the shore while the force of the waves had on its own moved cars.