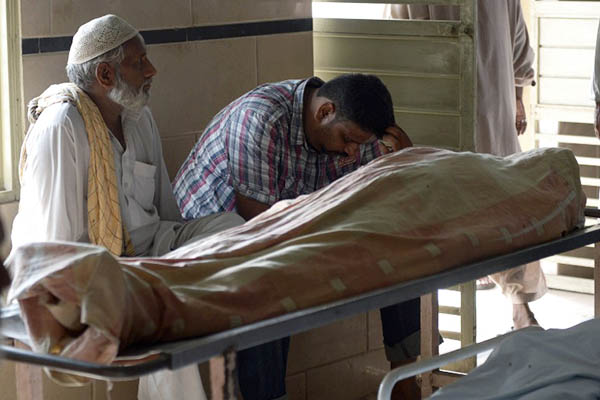 At least 485 have died in Karachi and its surrounding areas in the past three days, as the capital of Sindh province continues to face record-high temperatures of 49C with no respite in sight.

Talking to media on Monday night, Jam Mehtab Dahar, the health minister for Sindh, said most of the deceased were elderly suffering from heatstroke. “Two hundred bodies were received at Jinnah Hospital, another 74 at Abbasi Shaheed Hospital, 73 at Civil Hospital, 17 at Lyari General Hospital, 17 at Sindh Government Hospital, 2 at KPT Kemarhi Hospital and 102 at private hospitals across the city,” he said, adding that an emergency situation had been imposed at all hospitals to ensure patients received the best care.

Another 11 deaths were also reported Monday in southern Punjab. “Eleven people have so far died because of heat related diseases in South Punjab during last 48 hours,” said a health official in Multan.

Iqbal Kazmi, in-charge of rescue operations at Pakistan’s largest charity Edhi Welfare Center, said their Karachi morgue had received hundreds of bodies in the past 72 hours. “We have shifted over 300 bodies in the past 72 hours,” he said, adding, “At least 30 of those were found without any identification. This is the most bodies we have ever received in just three days.”

Dr. Seemi Jamali, head of the emergency unit at Karachi’s Jinnah Hospital, said the facility was at peak capacity. “Over 1,500 patients have been brought to the hospital in the past three days—all of them suffering from heatstroke. Of these, 200 were either dead on arrival or died while receiving treatment,” she said. “We no longer have the capacity to admit any more patients and have started referring patients to private hospitals or Rangers-led heatstroke relief centers to ensure they will receive immediate care.”

Irum Bano a resident of Malir Town, blamed the deaths on a combination of scorching temperatures and a lack of electricity. “We haven’t had electricity for 18 hours. How are we supposed to escape the heat?” she asked. Another civilian, Mohammad Ali Sheikh, also blamed the lack of power for the ongoing water crisis. “There is no electricity and no water. People may have died of heatstroke, but the real culprit is the provincial government, which failed to ensure they had basic human necessities,” he said.

Pakistan’s Met Department has warned that the heatwave will continue until Tuesday night, when monsoon rains are expected to lower the temperatures. “This is the worst heatwave we have witnessed in Karachi in decades,” said Mohammad Hanif, a director at the Met Department. “Even at night, the temperature has not dropped below 39C.”