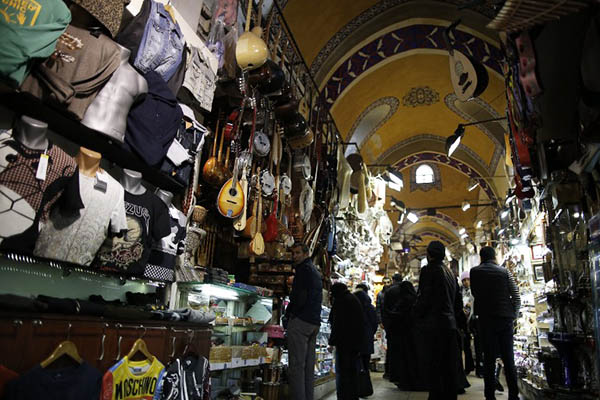 Tourists stay away from Istanbul as terror threat ramps up following attack on international airport.

The tourists are so scarce you can hear their footsteps clattering down the empty shopping street. Nearly a week after the deadly airport bombings, it is eerily quiet in Istanbul. The magic of Turkey’s biggest city has been seducing visitors for centuries, from its array of historic mosques and palaces to its stunning views over the sparkling Bosphorus. But for people working in the once-thriving tourist trade, Tuesday’s gun and suicide bomb spree represents one more nail in the coffin for an industry already reeling from a string of attacks this year.

“It’s disastrous,” said Orhan Sonmez as he stood hopelessly offering tours of the Hagia Sophia, the cavernous former mosque and church that is now a museum. “All my life I’ve been a tour guide. Most of us have come to a turning point where we don’t know if we can go on. It’s tragic.”

Restaurants sit empty in the Sultanahmet tourist district, and five-star hotel rooms can be booked for bargain prices.

In happier years the queues outside the Hagia Sophia might have stretched an hour or longer at this time of year—today you can walk straight in and share the place with just a smattering of other visitors.

To add to the ghost town feel, many Istanbul residents have left the city for Bayram, a nine-day nationwide holiday that began Saturday.

Nineteen foreigners were among the 45 people killed at Ataturk airport by suspected Islamic State jihadists, and analysts say the attack may have been a deliberate attempt to weaken the Turkish state by hitting its tourist industry. The group had already been blamed for a January suicide blast that killed 12 German tourists in Sultanahmet, while three Israelis and an Iranian died in another on the Istiklal shopping street in March.

The TAK, a radical Kurdish group that has carried out several attacks in Turkey this year, also warned foreign tourists to stay away after it killed 11 people in an Istanbul car bombing in June.

The United States, Germany and several other countries have warned their nationals against threats in Turkey, which is a candidate to join the European Union.

Those still arriving say they are enjoying the peace and quiet, while taking a philosophical approach at a time when jihadist attacks have gone global. “This could happen in any city—it’s an unlucky lottery,” said Irish visitor Nessa Feehan, perusing Sultanhamet’s empty shops as she whiled away a stopover on her way to India. “The people are really friendly, and I really think I’ll come back and spend some more time here.”

In May, Turkey suffered its worst drop-off in visits in 22 years—down 35 percent from a year ago—as an industry which ordinarily brings in 30 billion euros went into free fall. This was partly a result of a Russian ban on Turkish package holidays that Moscow had slapped on Ankara over a bitter diplomatic row.

That ban was lifted last week as the two countries made up—cause for celebration in the resort province of Antalya, where Russians traditionally come to sun themselves in their droves.

That will be a boost for the tourist industry as a whole, but Russians tend to plump for all-inclusive deals on Turkey’s turquoise coast rather than heading to Istanbul to soak up history. “If it goes on like this, many shops will close,” said Ismail Celebi, worrying at a string of prayer beads in one hand as he sat at the gleaming counter of his jewelry shop. “I’m thinking of moving to America. I can’t make money here.”

The large Chinese tour groups still arriving are about the only bright spot on the horizon, said Celebi, adding that they spend “crazy money.”

“But it’s not enough,” he said. “We need Americans, we need Europeans.”

His shop is just a stone’s throw from the scene of the Sultanahmet bombing that left a dozen Germans dead six months ago—and Celebi said he didn’t blame people for not wanting to come. “Even I’m afraid to come to work here,” he said.