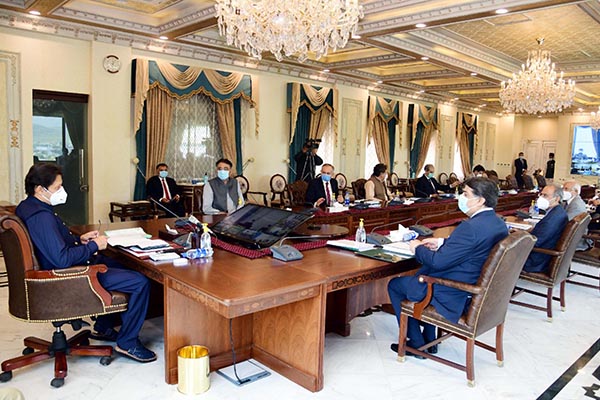 Chaired by Prime Minister Imran Khan, the meeting of the NEC—the country’s highest forum on the economy—said the PSDP allocation included Rs. 70 billion that had already been set aside for short-term projects dedicated to overcoming the coronavirus pandemic. According to a press release issued by the Prime Minister’s Office, this year’s PSDP allocation includes only those projects that have already been approved by the relevant forums “strictly in accordance with the best practices of planning.”

Attended by all provincial chief ministers and relevant stakeholders, the NEC meeting slashed the Annual Development Programs (ADP) of all four provinces by 16 percent, reducing it from Rs. 799 billion in the outgoing fiscal to Rs. 647 billion in the next.

In the federally-administered areas, Pakistan-administered Kashmir’s allocations have been fixed at Rs. 24.5 billion, while Gilgit-Baltistan stands at Rs. 15 billion.

The meeting, according to the press release, reviewed the state of economy during the outgoing fiscal 2019-20 and projections for the incoming fiscal 2020-21. “It was noted that the upward trajectory of economy, made possible after huge efforts of the present government, was severely affected by COVID-19 pandemic,” claimed the press release, adding that the government had appreciated its own steps for “protecting the poor segments of society” from adverse impacts of lockdowns imposed to curb the virus.

The NEC meeting approved a GDP growth target of 2.1 percent, along with sectoral growth projections of agriculture (2.8 percent), industry (0.1 percent) and services (2.6 percent), for next year. In the outgoing fiscal, Pakistan saw a revised growth target of 1.9 percent—the first time the country’s economy has actually contracted in over 60 years. Observers say it is unlikely that a pandemic-hit Pakistan would be able to overcome that growth in the next fiscal.

According to the press release, the NEC noted that “various initiatives taken by the federal government have contributed toward expediting the development process through timely implementation of critical development schemes.

“These initiatives include enhancing the sanctioning powers of Departmental Development Working Party from Rs. 60 million to Rs. 2 billion; Central Development Working Party from Rs. 3 billion to Rs. 10 billion; and the ECNEC above Rs. 10 billion; quarterly authorizations without originating demand, real-time information on expenditures through SAP system and establishment of Public-Private Partnership Authorities to facilitate involvement of private sector in complementing the development process,” it said.

The NEC meeting claimed that the impact of COVID-19 would likely keep the country’s growth restricted in the upcoming year, while growth targets were told to be “subject to favorable weather conditions, post-COVID-19 economic recovery, managing current account deficit, consistent economic policies and aligned monetary and fiscal policies.”

The meeting believed monetary easing and debt relief would improve the country’s fiscal position, and predicted inflation would remain in single digit at around 6.5 percent—the year-on-year inflation in May 2020 was 8.5 percent.

The prime minister, during the meeting, reiterated his claims that the government would prioritize sectors that generated job opportunities for the youth, agriculture, and upgrading of the country’s public health system. He emphasized the need to ensure seamless coordination between the federal and provincial governments during finalization and implementation of all development projects.

Khan also stressed obtaining real-time feedback from the public on the implementation status of development projects so required changes could be initiated.