Home Lightbox Need for the Unexpected

Need for the Unexpected 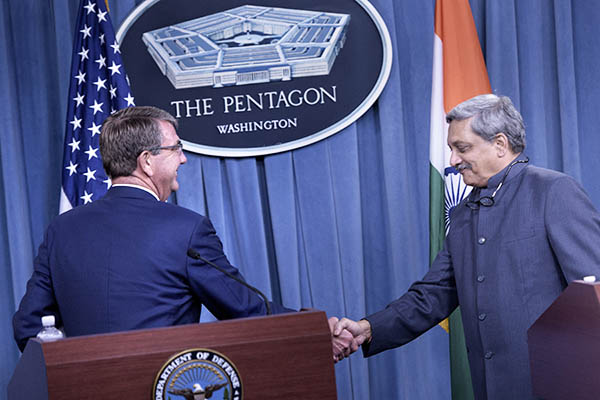 On Monday, the United States and India signed the Logistics Exchange Memorandum of Agreement. The LEMOA, which is based on the Logistics Support Agreement, and allows the two sides to use each other’s military facilities for supplies, spare parts, services and refueling, had been in the offing since January this year when the Indian Ministry of Defense received the first draft of it from the Pentagon.

By early April this year, when U.S. Defense Secretary Ashton Carter visited India, there was an agreement in principle about signing LEMOA. Although the agreement could not be signed during Indian Prime Minister Narendra Modi’s visit to Washington in June, its text had been finalized.

Indian Defense Minister Manohar Parrikar, who is on a four-day visit to the U.S., his second in eight months, will also be moving forward “on talks on acquiring jet engine technology and unmanned aerial vehicles (UAVs).” The U.S. is already interested in allowing transfer of U.S. technologies to Indian Navy for the construction of India’s second aircraft carrier. These items came up during Carter’s April visit to Delhi, which saw the establishment of the Aircraft Carrier Working Group between the two navies. So far, no progress has been made on that, even though the Indian Navy is deeply interested in flattop carriers and the Indian Ministry of Defense has sanctioned INR25 million to “study and prepare a project report for the second indigenous aircraft carrier.”

On Aug. 28, a day before the signing of LEMAO, Forbes wrote in an article captioned China And Pakistan Should Note—This Week, India And U.S. Sign The LEMOA Pact: “For the U.S., this is one part of the much larger ‘pivot’ to Asia intended by President Obama to meet a rising China. The U.S. Navy plans to deploy 60 percent of its surface ships in the Indo-Pacific in the near future. Instead of having to build facilities virtually from the ground up, as in Afghanistan and Iraq, the U.S. has the benefit of simple arrangements for the tremendous Indian facilities.

“For Prime Minister Modi, it is one further step, part of a much broader move for India away from its Cold War alliance with Russia, toward a new alliance with the U.S. (and Japan and Australia) to protect the Indian Ocean and the seas off Southeast Asia, especially from China.”

What does this mean?

One, Washington, since the Clinton Administration, has decided to develop and deepen its strategic partnership with India. There’s bipartisan consensus on it, given that there was a Republican president between Clinton and Obama.

Two, while India, since the Kargil conflict in 1999, has moved toward the U.S., this is the first time that Delhi, under Modi, is prepared to move beyond Delhi’s traditional relations with Moscow at a time when President Vladimir Putin’s Russia is checking U.S. moves pronouncedly and is closer to China than ever before.

Three, the U.S.’s “pivot to Asia” policy is an overt and multilayered strategy to check China’s rising power, especially in the South China Sea, but also in relation to China’s extremely ambitious “One-Belt, One-Road” strategy, itself a multilayered, multilateral strategy meant to secure China’s Lines and Sea Lanes of Communication even as Beijing projects power in the South China Sea.

Four, these developments—the U.S.’s China strategy and its strategic partnership with India which is underpinned by investments and multiple technology-transfer agreements—mean greater power rivalry in this region and with it more instability.

Five, despite India’s hostile relations with China, Delhi is not, and will not be, in a position to directly threaten China for years to come. India also has burgeoning trade with China and Delhi would like to employ the strategy of the indirect approach to hurt China’s interests. This means more focus on checkmating Pakistan.

The rapid enhancement of India’s military capabilities on the ground, in the air and on sea create a major security problem for Pakistan. While India has always shunned meaningful talks with Pakistan on the issues of nuclear and conventional forces rationalization, invoking China, the fact is that 80 percent of India’s military deployments are Pakistan-specific.

Six, Modi, while strengthening ties with the U.S. and its allies, notably Japan and Australia, is also embarked on a regional strategy to isolate Pakistan. In this he is relying on Pakistan’s strained relations with Afghanistan, tricky relations with Iran, and the hostile-to-Pakistan government of Haseena Wajid in Bangladesh. New Delhi is also exercising tremendous pressure on Sri Lanka, while Nepal cannot afford to upset Delhi and Bhutan and the Maldives are no more than Delhi’s protectorates.

As part of this strategy and given Pakistan’s diplomatic offensive in the wake of Indian brutality in Occupied Kashmir, Delhi’s latest move is to keep Pakistan out of the BRICS regional outreach, which is to be held in Goa on Oct. 15-16. To this end, circumventing the SAARC framework, India is using the BIMSTEC [Bay of Bengal Initiative for Multi-Sectoral Technical and Economic Cooperation] forum, which includes Bangladesh, India, Myanmar, Sri Lanka, Thailand, Bhutan and Nepal. Two other SAARC countries that are not part of BIMSTEC, Maldives and Afghanistan, according to reports, will be invited as observers. At the outreach, India plans to also set the tone and agenda for the upcoming SAARC meet by portraying Pakistan as the spoiler in the region.

What are Pakistan’s options?

One, there’s not much Islamabad can do about the U.S.-India strategic partnership. It is grounded, at this point, in factors that are exogenous to Pakistan’s relations with the U.S. However, the U.S. also has her interests linked with Pakistan, despite increasingly less convergence on Afghanistan. One of those interests is about ensuring that there’s no hot contest between India and Pakistan, which could escalate to the nuclear level. Pakistan’s U.S. diplomacy has to take advantage of Washington’s interests tied up with Islamabad rather than employing the negativity of its [Washington’s] partnership with India.

Two, while Pakistan’s relations with Afghanistan are a tricky affair because of multiple factors—problems with Kabul, Kabul’s tendency to apportion blame to Pakistan for its own inefficient and fractured government, as also because of Kabul’s outreach to Delhi and the latter’s hostility toward Islamabad—Islamabad has to continue to seek improved relations with that country. This, again, requires taking positive unilateral decisions without compromising on Pakistan’s core security interests.

Three, Pakistan needs to reach out to Iran. India is relying on playing a bigger role in Afghanistan in collaboration with the U.S. and Iran. Iran is also ambitiously projecting power in the greater Middle East. That said, there’s convergence of interest between Iran and Pakistan in ensuring stability in the Balochistan landmass, as also in Afghanistan. Those convergences can be built upon.

Four, Pakistan needs to repair relations with Saudi Arabia and the GCC countries. This will be tricky, given how the Middle East stage is shaping up between the Arab world and Iran. But it’s not impossible because states do not deal with each other on single-point agendas. The very complexity of the situation affords room for maneuver on issues of mutual interest.

Five, Pakistan needs to continue to strengthen its ties with friendly countries like China, Turkey and, yes, the Russian Federation. Islamabad’s ties with Moscow have improved in the last 10 years but with Delhi now moving very overtly into the U.S. camp means a greater opening of the space for Pakistan vis-à-vis Moscow. Pakistan should capitalize on this opportunity.

Chess has a term: zugzwang. Near-impossible for non-Germans to pronounce the two zeds in the word—a combination of two words, zug (move), zwang (compulsion to do something)—it denotes a situation for a player when any move will worsen his position. The player cannot pass but must move, but making a move will decidedly put him at a disadvantage because it inheres in the compulsion to move.

The challenge for Pakistan is to avoid being in a zugzwang. This means a strategy rethink. The question to address is: do we continue along a path that the adversaries have chalked out for us, relying on our studied and expected responses, or do something unexpected. My vote is for the unexpected.

Pakistan is bleeding internally. Plug that first. No amount of external dressings would serve any meaningful purpose.

As any hostile move towards India belongs to the realm of expected, the only unexpected that Islamabad can do is a friendly overture to New Delhi.which is precisely what the latter is seeking.