Home Lightbox Neither Free nor Equal

Neither Free nor Equal 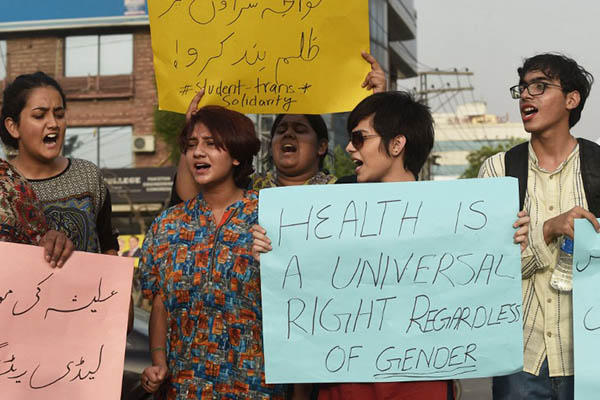 Transgender individuals and their supporters in Lahore protest the killing of Alesha. Arif Ali—AFP

Alesha and the plight of Pakistan’s transgender community.

Alesha was rushed to Peshawar’s Lady Reading Hospital after being shot multiple times on May 22. Other patients refused to be treated near the young transgender woman, and caregivers were equally callous, criminally uncertain whether to place her with male patients or female ones. Pleas to attend to her injuries were met with ridicule, inappropriate remarks, and demeaning questions about her gender. Three days later, she was dead. Alesha would perhaps have lived had prejudice not clouded the judgment of medical professionals.

Unfortunately, such tragedies appear routine. According to LGBT activists, some 45 transgender persons have been killed in Khyber-Pakhtunkhwa province so far this year. Pakistan’s public health facilities are not known for their efficiency, competence or compassion. Alesha’s case is a vivid example of this. But there is some consolation in the unexpectedly wide outrage over the treatment meted out to Alesha. It is perhaps for the first time that the daily sufferings of Pakistan’s transgender community have become visible to a society that had long been resolutely insensitive and ill informed about their plight.

Any civilized society would respect the fundamental principle that all human beings are born free and equal in dignity and rights. Any state worth its name would ensure accountability of anyone violating this principle. The Constitution of Pakistan guarantees the right to life and the inviolability of the dignity of person. Obligations under international laws bind states to prevent violence and discrimination based on gender identity.

It is true that transgender people are subjected to killings, rape and physical attack, humiliation as well as discrimination in employment, health and education in most parts of the world. Human rights defenders who raise their voices for the protection of transgender rights are also among the most targeted and vulnerable to harm everywhere. It is, however, an encouraging sign that, despite resistance by those who use religion or culture as a cover for blatant prejudice, some states have taken stringent measures to deter violence or discrimination against the transgender population within their jurisdiction. A landmark judgment of the Supreme Court of Pakistan recognized the right of the transgender community to an identity card. The judgment, however, was silent on the issues of physical violence, sexual abuse and exploitation that are the common experience of almost all transgender people in the country.

These are issues that can no longer remain unaddressed by the state. Civil society is becoming more vocal about its concerns regarding the rights of transgender people. The community itself is becoming more organized to voice their grievances. Regrettably, the state has yet to recognize that its duty to protect includes the protection of its transgender citizens. This is apparent from the lack of interest shown by the Khyber-Pakhtunkhwa government to ensure justice or accountability for the humiliation of the transgender community in Alesha’s case.

Lack of adequate legal protection and insensitive social policies of the state have left transgender people open to egregious violations of their human rights. Impunity still prevails for violence based on gender identity, and the incessant violation of the right of transgender people to dignity still escapes the notice of the Pakistani state.

Jilani is a senior lawyer and human-rights advocate based in Lahore.