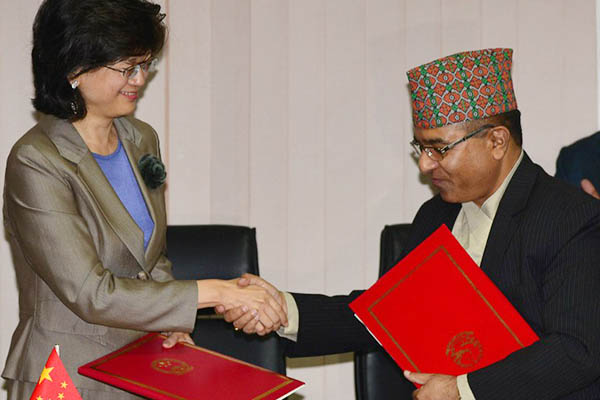 Nepal on Friday signed up to China’s new Silk Road drive, a massive infrastructure project spanning some 65 countries at the center of the Asian giant’s push to expand its global influence.

The long discussed deal between impoverished Nepal and its much bigger neighbor comes just days before China hosts a summit for 28 leaders near Beijing, showcasing the ambitious plan. The One Belt, One Road Initiative spearheaded by President Xi Jinping would see 60 percent of the global population and around a third of global GDP linked through a network of Chinese-bankrolled ports, railways, roads and industrial parks.

The deal will see China plough money into Nepal for a series of projects including boosting its road network, power grid and a new railway connecting the capital Kathmandu with Lhasa in Tibet. “We believe China will bring more investment to Nepal, helping the country overcome its status as a landlocked and least developed nation,” said Nepal Foreign Minister Prakash Saran Mahat at the signing of the deal on Friday.

Analysts have expressed concern over the Asian giant’s attempt to take a lead in global commerce, cautioning that an integrated world trade system where China’s Communist party sets the rules could come with serious risks and hidden costs.

Struggling countries could be saddled with Chinese loans requiring payment regardless of project performance, Fitch Ratings said. In Kathmandu, China’s Ambassador to Nepal Yu Hong appeared aware of such criticism and described the plan as a “symphony performed by an orchestra” not China’s “solo show” in a short speech at the signing ceremony.

“The Initiative is not going to be China’s solo show. A better analogy would be that of a symphony performed by an orchestra composed of all participating countries,” Yu said. “The One Belt, One Road Initiative will bring new opportunities for China-Nepal cooperation and South Asia development,” she added.

The newly-inked deal will be closely watched by Nepal’s other large neighbor, India, which has traditionally played the role of big brother to the much smaller country. Landlocked Nepal remains dependent on India for the majority of its imports, but the previous administration aggressively courted China as part of a nationalist drive to decrease the country’s reliance on New Delhi.