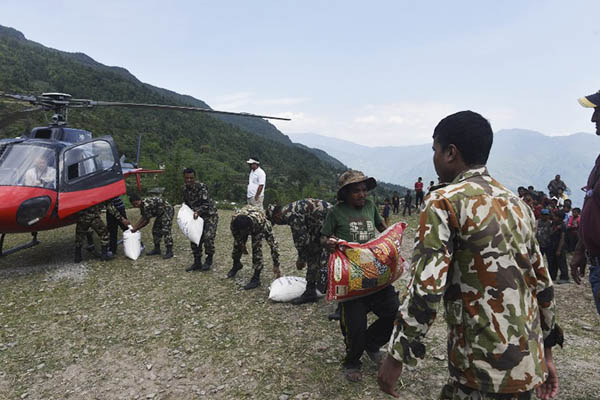 Nepal’s prime minister on Thursday said his government was unprepared for the strong earthquake that hit two days ago, as he visited one of the areas worst hit by the disaster.

Tuesday’s 7.3-magnitude quake triggered landslides and brought down houses, bringing fresh misery to a country still reeling from an earlier massive tremor that left more than 8,000 people dead and destroyed half a million homes. “Together we can tackle this calamity,” Prime Minister Sushil Koirala told journalists in the northeastern town of Charikot near the Tibetan border, according to the Kantipur news website. “We were not prepared for it… We will move ahead now,” added Koirala, whose year-old government has faced criticism over the speed of its response to the twin quakes.

Charikot is the main town in Dolakha district, where police said they were still searching for people missing after landslides triggered by Tuesday’s quake. An AFP photographer in Charikot said most of the houses had been reduced to rubble and landslides were still occurring.

Victims from across the district had flooded into the local clinic, among them a nine-month-old baby girl who had survived a landslide that killed her mother. Police spokesman Kamal Singh Bam said the death toll from the latest tremor, centered 76 kilometers east of Kathmandu, had risen to 110, with another 2,609 injured.

In the neighboring district of Sindhupalchowk, a Norwegian Red Cross field hospital was overrun with victims of Tuesday’s quake, among them Maiti Thami. The 38-year-old had been living outside her house since April 25 but went inside on Tuesday to grab firewood just as the roof collapsed, knocking her unconscious. “It broke my arm and I have had to get 20 stitches on my head,” she told AFP from her hospital bed.

Nurse Rannvig Anderson said many of the victims had fractures after jumping from buildings during the quake for fear they would collapse. Tuesday’s quake compounded the already major challenge of getting desperately needed relief supplies to the far-flung mountain communities worst hit by the 7.8-magnitude quake that struck on April 25. But helicopters and hundreds of troops were diverted Thursday to search for a U.S. military helicopter that disappeared with eight people on board while delivering aid to quake victims.

For a third straight day, U.S. and Nepalese military helicopters and hundreds of ground troops scoured a remote mountainous area where the chopper went missing. “The biggest problem is the terrain. This is in the shadow of Mount Everest,” Pentagon spokesman Colonel Steven Warren said, noting that at least 13 sorties were flown over a 24-hour period as part of the search. “It’s very difficult.”

The monumental challenge the government faces has been compounded by extensive damage to the Singha Durbar government complex in Kathmandu, parts of which are now so unstable they can no longer be used. The prime minister’s spokesman, Uttar Kumar Khatri, said his team was now operating out of a tent, calling it a “difficult situation.”

Koirala traveled to Charikot with Maoist leader Pushpa Kamal Dahal—known better as Prachanda—in a rare show of unity between the two political rivals. He won praise for giving away his seat on the army helicopter back to Kathmandu to a woman who urgently needed medical attention. But there has also been criticism of Nepal’s politicians.

The United Nations said late Wednesday there was an “urgent need for tents, generators and fuel supply to ensure that radio stations continue broadcasting and collecting information from affected communities.”

Scientists say Tuesday’s quake was part of a chain reaction set off by the April one that struck in Lamjung district west of Kathmandu.