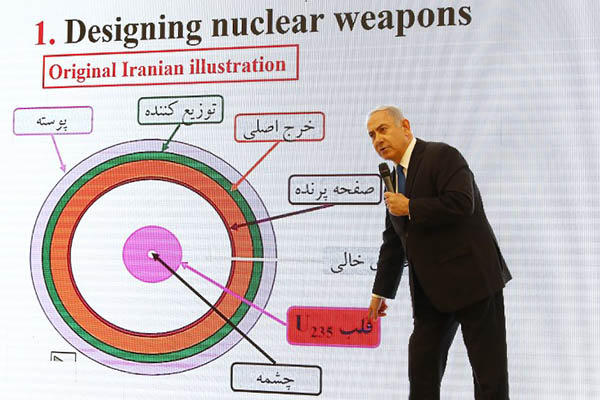 Israeli prime minister’s ‘proof’ comes ahead of U.S. decision on whether or not to stick with atomic accord

Israeli Prime Minister Benjamin Netanyahu said he had new “proof” of an Iranian nuclear weapons plan that could be activated at any time, as the U.S. considered whether to pull out of the atomic accord with Tehran.

The documents released by Israel on Monday were “authentic,” according to U.S. Secretary of State Mike Pompeo, until last week director of the CIA. As he returned from a trip to meet Netanyahu, Pompeo said much of the information they contained was new to American experts.

In an elaborate televised presentation that included props, video and slides, Netanyahu accused Iran of lying about its nuclear ambitions, but he did not provide evidence that Israel’s main enemy had actively worked to obtain an atomic weapon since the 2015 agreement between Tehran and six world powers.

Iran has always denied it sought a nuclear weapon, insisting its atomic program was for civilian purposes.

Iranian Foreign Minister Mohammad Javad Zarif reacted to the latest claims by lambasting both Netanyahu and U.S. President Donald Trump, who has a May 12 deadline to decide whether to walk away from the nuclear deal.

Trump reiterated his aversion to the “horrible” deal, highlighting provisions in the agreement restricting Iran’s nuclear activities that begin expiring in 2025. “In seven years, that deal will have expired and Iran is free to go ahead and create nuclear weapons,” Trump told a joint press conference with his Nigerian counterpart Muhammadu Buhari.

While most world powers say the deal is working as intended for now and is the best way to keep Iran from acquiring the bomb, Trump has been threatening to pull out for months.

Netanyahu, speaking in Tel Aviv, said Israel had recently obtained tens of thousands of files in a “great intelligence achievement,” saying they had been moved to a secret compound in Tehran in 2017 that looked dilapidated from the outside. The material obtained weighed a half a ton, he said, speaking in the staged presentation in front of a bookcase laden with binders he said held copies of original documents and cases of CDs.

He then laid out what he said was a years-old secret nuclear weapons program stored away that could be put into action at any time. The details have been shared with the United States and will also be given to other countries and the International Atomic Energy Agency (IAEA), he said.

The White House underscored the U.S. policy that “Iran must never have nuclear weapons” in a statement about Netanyahu’s speech. “These facts are consistent with what the United States has long known: Iran had a robust, clandestine nuclear weapons program that it has tried and failed to hide from the world and from its own people,” it said.

Supporters of the Iran nuclear deal have argued that Netanyahu’s intelligence release deals simply with a historic Iranian program and does not prove they are in breach of the 2015 accord. But Pompeo argued that it helped to “spell out the scope and scale of the program that they undertook” in Iran.

He said Trump would have to determine whether the United States feels Iran is in violation of the deal, and said U.S. translators and analysts are still trawling through the intelligence provided by the Israelis.

Trump and his Middle East allies argue that the agreement, approved by Barack Obama, was too weak and needs to be replaced with a more permanent arrangement and supplemented by controls on Iran’s missile program.

Zarif accused Trump of “jumping on a rehash of old allegations already dealt with by the IAEA to ‘nix’ the [2015 nuclear] deal.”

“How convenient. Coordinated timing of alleged intelligence revelations by the boy who cries wolf just days before May 12,” Zarif said of Netanyahu.

French President Emmanuel Macron and Chancellor Angela Merkel of Germany left Washington last week after talks with Trump that failed to secure any promise to keep the deal alive.

The Israeli premier has repeatedly called for the accord—which Iran signed with Britain, China, France, Germany, Russia and the United States—to either be altered or scrapped. He says the agreement does not prevent Tehran from eventually obtaining nuclear weapons and says the lifting of sanctions has increased Tehran’s ability to finance proxy militants in the Middle East.

Netanyahu also wants to see curbs on Iran’s missile program. He said the nuclear deal was “based on Iranian lies and Iranian deception.”

“Even after the deal, Iran continued to preserve and expand its nuclear weapons know-how for future use,” Netanyahu added.

Rob Malley, a former Obama administration official, tweeted that “for those who have followed the Iranian nuclear file, there is nothing new in [Netanyahu’s] presentation.”

“All it does is vindicate need for the nuclear deal. But the Israeli prime minister has an audience of one: Trump. And he’s unfortunately unlikely to reach the same conclusion.” Israel is considered the Middle East’s sole nuclear-armed nation, though it has never acknowledged the capability.