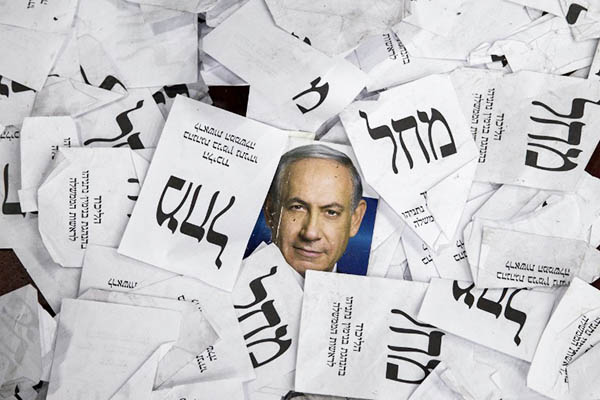 Israeli prime minister sparked controversy ahead of polls by claiming he would never allow a two-state solution under his rule.

The E.U. congratulated Netanyahu on his victory, but said it was committed to restarting the peace process between Israel and the Palestinians that he rejected in the last days of the campaign. British Prime Minister David Cameron took a similar stand, tweeting his congratulations but letting his spokesman emphasize that “he wants to see peace, wants to see a two-state solution.”

Netanyahu’s last-ditch lurch to the right—vowing that the Palestinian state would never be recognized on his watch—may have helped him clinch victory but sets up an awkward diplomatic scenario, analysts said. “A major part of the peace process with the Palestinians has been to maintain the pretense, the make-believe idea, that it will eventually lead to a two-state solution,” said Daniel Levy, director of the Middle East and North Africa Program at the European Council on Foreign Relations. “They were already skating on thin ice and now Netanyahu has taken a pick-axe to it.”

With Netanyahu promising to abandon any semblance of a two-state solution, pressure may now increase on the West to force through a peace process. “Either the United States and Europe get involved with a plan and a will to see it through, or we are facing a new war in Gaza, maybe even in the coming months,” warned Jean-Pierre Filiu, a French academic and author of Gaza: A History. “The U.S. and Europe must impose peace. They must admit that the parties involved do not get on and that peace is unpopular, and so it must be imposed.”

Netanyahu’s hard line had already plunged relations with the West to an unprecedented low, which his latest comments will do little to repair. “The relationship with America is as bad as it’s ever been. Having set out his stall so strongly, it will be hard for Netanyahu to come back and say it was just part of the campaign,” said David Hartwell, managing director of Middle East Insider, based in London.

It is not only the Palestinian issue, but also Netanyahu’s absolute refusal to support the negotiations with Iran over its nuclear program that has put Israel at odds with international partners. “Bibi has defied the international consensus on the Palestinians and Iran,” said Levy, using Netanyahu’s nickname. “The question is whether he keeps going down that path. My guess is he will pull back slightly—he has already done his worst in trying to torpedo the Iran deal in America.”

Netanyahu argues Iran cannot be trusted with any deal to limit its nuclear ambitions, and represents an existential threat to Israel. He has powerful backers among the opposition Republican party in the U.S., who controversially invited him to speak to Congress earlier this month and were the first in Washington to welcome his election win. His critics say he has stoked the threat from Iran to bolster his domestic position and deflect attention away from other issues.

“He will continue to use his influence in the U.S. Congress to undermine the Iran deal, but he has never been able to present a coherent alternative,” said Hartwell. “Even a Republican president is not going to rush into war with Iran.”

There is still hope that Netanyahu will be able to row back from his hardline positions once back in power. His comments about refusing a Palestinian state “came during the last 48 hours of his campaign,” said Nathan Thrall, of the International Crisis Group in Jerusalem. “I put much more stock in his actual behavior and we know that he has agreed on numerous occasions to negotiate with the Palestinians on the basis of the 1967 borders. He has never quite admitted that publicly but on several occasions he has done so in private.”

But regardless of his moves in the coming months, analysts agree that Netanyahu has injected a poisonous polarization into Israeli politics that makes it difficult to maintain partnerships with the Western world. His warning to supporters that they must come out to vote because “Arabs are voting in droves” has proved particularly controversial. “It’s unbelievable,” said Levy. “Can you imagine a European or American politician saying ‘Vote for me because the Jews or the blacks are voting in droves’? Even the far-right can’t say that.”