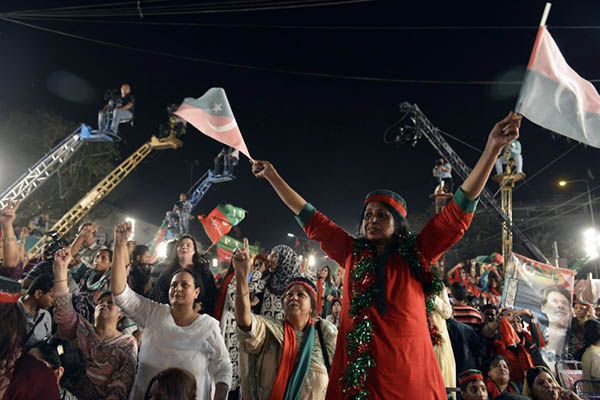 How far is the opposition willing to go to oust the Sharifs from power?

Imran Khan, chairman Pakistan Tehreek-e-Insaf, is on a roll again. Since the release of the Panama Papers, Khan’s agitational politics and rhetoric, which had all but fizzled out, have picked up again. Once again, he is demanding that Prime Minister Nawaz Sharif resign and present himself to the people for accountability.

At the Lahore rally on Sunday, Khan not only demanded that Sharif resign but said that he must go to jail. He also spoke about marching to the Sharifs’ huge estate, Jati Umra, in Raiwind. However, in Lahore he said that while the party’s cadres should be prepared for his call, the PTI, for now, will first hold a rally in Faisalabad.

The Islamabad and Lahore rallies couldn’t garner the kind of crowds the PTI is famous for but Khan senses that this time he has latched on to something more solid. Ironically, his strategy relies on the perception, carefully crafted by the Pakistan Muslim League (Nawaz), that PMLN and the Sharifs, unlike the Pakistan Peoples Party and the Bhutto-Zardari clan, have clean hands and are rooted in Pakistan.

To be precise, this is not the first time that Khan has talked about the Sharifs’ alleged corruption and London properties. What’s different this time is the Panama Papers ‘evidence’: the Sharifs have assets abroad and it’s not just Khan who says this but Panama Papers.

P.M. Sharif realizes the threat this poses. Try as the PMLN might to downplay the political and perception cost of Panama Papers, the fact that it has shaken the Sharifs cannot be denied. The party has thrived politically on four major factors: the Sharifs are an indigenous lot, nothing Harvard or Oxbridge about them; honest, hardworking businessmen, they are from among the people, sons of this soil; the party has had close affiliation with businessmen and traders; and the party has a center-right ideology.

These four pillars are crumbling. The rightwing, both Deobandi and Barelvi are peeved because of operations against Deo-Salafi groups as well as the execution of Mumtaz Qadri, the Barelvi ‘hero’ who murdered Governor Salmaan Taseer. The traders are unhappy because of the taxation regime and now this: the sons of the soil might just be as ‘foreign’ as others who can fly out of Pakistan sooner than one can say Mustansar Hussain Tarar. This last bit is the most damaging, not least because their foreign-ness is not even underpinned by the Harvard and Oxbridge glitter.

No surprise then that P.M. Sharif, in his second televised speech, expended so much time on his and his family’s indigenousness. That was the motif. The fifth pillar that distinguishes the PMLN from the remarkable apathy and dysfunctionality of the PPP is that it delivers. One can disagree with the development priorities but the stark contrast Lahore presents to Karachi or Peshawar is there for everyone to see: the infrastructure, roads, public transport et cetera.

Khan attacked the PMLN development model, for sure, stressing human development, especially education and health, but it didn’t really work—until now, not least because he hasn’t been able to deliver much on development in Khyber-Pakhtunkhwa.

This time is different: with the Sharifs’ and with them the PMLN’s clean image muddied, questions about the cost of such projects begin to sound more pertinent. And when cost becomes relevant, it makes space for other, more nuanced criticism of PMLN’s infrastructure development. It also pushes to the surface the style of governance of younger brother and Punjab Chief Minister Shahbaz Sharif. He dislikes delegating authority, concentrates power in his person and bulldozes opposition to what he wants.

The other factor that is working to the advantage of Khan and against the Sharifs is the PPP. Unlike during the PTI-PAT invasion of Islamabad when all the parliamentary parties closed ranks with the prime minister, this time the PPP wants to join the hunt. The party’s policy is simple and pegged on two considerations: one, the Punjab PPP leaders have long been arguing against giving space to the PMLN. This had once again come up very strongly in the Dubai meeting last fall. The other prong is to let Khan focus on the Sharifs and see where this goes. If it begins to hot up for the Sharifs, the PPP could then decide whether to ratchet up its own rhetoric against the Sharifs or throw in the rope to the drowning Sharifs and pull them out.

This is why Zardari is quiet and Bilawal is upfront, although PPP insiders told this writer that this isn’t just a “local offensive” and Zardari is onboard. In essence the PPP is playing second fiddle to the PTI but hoping that it will be able to cash in on this moment and that the moment could turn into an episode. This is a scavenging approach but given where the PPP stands—or doesn’t—this is the best the party can do, or thinks it can.

The PMLN is making noises and trying to control damage. The joint opposition’s initial effort to get a consensus on the Terms of Reference of the inquiry commission fell short but they have finally managed it. At my last call to someone in the room today (May 3), they had almost finalized the document. While the inquisitorial document doesn’t ask for the P.M.’s resignation, upfront, its fine print basically leads to that.

How will it play out? The biggest damage is to the clean image of the Sharifs. They may or mayn’t be legally at fault but there are questions of probity and people are asking those questions and not letting go.

The PMLN wants to get back to work because it thinks, not without good reason, that its style of development has worked and will work again, Panama or no Panama. The party may be right. The electoral system, configured as it is, has no space for a median voter bell curve. That works to the advantage of an incumbent like the PMLN that has delivered, even if ineptly.

Even so, thus far the PMLN strategy has been ham-fisted. They have also not been able to take full advantage of offshore accounts by Khan’s associates like Jehangir Tareen and Aleem Khan. And while the PTI, the PPP and Charlie’s aunt want to focus on investigating the Sharifs, the Sharifs have put out TORs—rejected by the opposition—that want to throw everything and the kitchen sink into the inquiry.

The outcome will depend on two variables: how far is the opposition prepared to take it and how long can it sustain the agitational pressure. The onus here will primarily be on the PTI with the PPP hanging onto that party’s coattails. If the PMLN can withstand the pressure, it will hope for this moment to stop short of becoming an episode. If, on the other hand, the pressure does get ratcheted and this turns into sympathetic detonation, the possibility of ‘grand arbitration’ by the military cannot be discounted, though it is unlikely to be in the form of a hard coup.