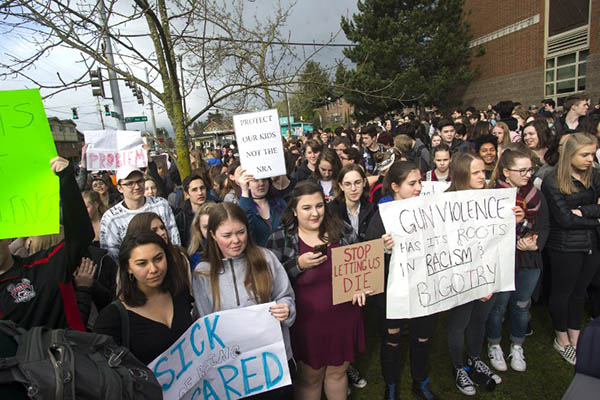 Students across the United States walked out of classes on Wednesday in a nationwide call for action against gun violence following the shooting deaths last month at a Florida high school.

At 10:00 a.m., students in numerous cities held a moment of silence to honor the 14 students and three adult staff killed on Valentine’s Day at Marjory Stoneman Douglas High School in Parkland, Florida. The “National School Walkout” was intended to last for 17 minutes, one for each victim. But it quickly became apparent that many students at schools on the East Coast decided not to go to classes at all and to demonstrate instead.

The nationwide protest is being held one month to the day after Nikolas Cruz, a troubled 19-year-old former student at Stoneman Douglas, unleashed a hail of gunfire on his former classmates. The event to honor those slain at Stoneman Douglas is also an act of protest against the firearms violence plaguing the United States, which has more than 30,000 gun-related deaths annually.

Organizers come from the same group behind the Women’s March, which saw millions of demonstrators take to the streets in cities across the country in January 2017 to protest Donald Trump’s White House inauguration.

Trump had momentarily signaled support for increasing restrictions on guns, but now stands accused of bowing to the powerful U.S. gun lobby.