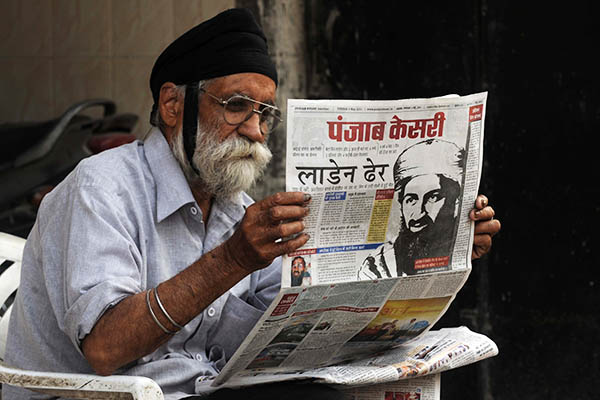 Qaedat al-Jihad will focus its efforts on India, Myanmar and Bangladesh in an apparent reaction to the growing influence of Islamic State.

Al Qaeda chief Ayman al-Zawahiri launched a new branch of the global Islamist extremist movement on Wednesday to reinvigorate and expand its struggle in the Indian subcontinent.

In a video spotted in online jihadist forums by the SITE terrorism monitoring group, Zawahiri said the new force would “crush the artificial borders” dividing Muslim populations in the region.

Al Qaeda is active in Afghanistan and Pakistan, where its surviving leadership are thought to be hiding out, but Zawahiri said “Qaedat al-Jihad” would take the fight to India, Myanmar and Bangladesh. “This entity was not established today but is the fruit of a blessed effort of more than two years to gather the mujahideen in the Indian sub-continent into a single entity,” he said.

Founded by Osama bin Laden, who was killed in Pakistan by U.S. commandos in May 2011, Al Qaeda has long claimed leadership of the jihadists fighting to restore a single caliphate in Muslim lands. But, since the death of its figurehead, it has been somewhat eclipsed, first by its own offshoots in Africa and the Arabian Peninsula, and now by the Islamic State jihadist group fighting in Iraq and Syria.

While still regarded as a threat to the West, Al Qaeda has never managed to repeat the spectacular success of the September 11, 2001 attacks by hijacked airliners on New York and Washington. But, in launching “Qaedat al-Jihad in the Indian sub-continent,” Zawahiri may be attempting to recapture some of the limelight for his group and to exploit existing unrest in Kashmir and Myanmar.

“It is an entity that was formed to promulgate the call of the reviving imam, Sheikh Osama bin Laden, may Allah have mercy upon him,” Zawahiri said. Zawahiri called on the Ummah to unite around “tawhid,” or monotheism, “to wage jihad against its enemies, to liberate its land, to restore its sovereignty and to revive its caliphate.”

He said the group would recognize the overarching leadership of the Afghan Taliban leader Mullah Muhammad Omar, and be led day-to-day by senior Pakistani militant Asim Umar.

A senior Afghan Taliban commander told AFP that Asim Umar was using an alias and was a Pakistani national who has written books on the history of Islamic military struggles and predictions for future conflict. Local officials say many of the Arabs once drawn to Al Qaeda in Pakistan have moved to join the fight in Syria and Iraq, and there is anecdotal evidence of Pakistanis joining them, though numbers are hard to ascertain.

But there have been very few reports of young Indian men leaving to fight Islamist causes abroad, which experts say is because local grievances have kept them at home. “We don’t know about any active Al Qaeda cell or members in India until now,” said Rahimullah Yusufzai, a Pakistani expert on militant movements. “Now they are trying again. It could be due to the rise of IS and the drop in support for Al Qaeda, defections in Iraq, Syria and elsewhere—now they are trying to open a new front. But the problem is that if your support base is shrinking in the Middle East, Afghanistan and Pakistan—these were Al Qaeda strongholds—if Al Qaeda is losing there, you can’t hope that Al Qaeda will get some new recruits in India or Burma.”

The 55-minute video begins with stock footage of the late bin Laden giving a sermon, before cutting to a satellite map of southwest Asia, the Middle East, the Indian subcontinent and the Horn of Africa. Then it cuts to a white-bearded Zawahiri, in a white turban and glasses, against the backdrop of a brown floral curtain and desk with hardback books and a tin holding ballpoint pens and prayer beads.

Umar also speaks in the video, using Urdu instead of Zawahiri’s native Arabic, along with a new group spokesman identified as Usama Mahmoud. The Pakistani speakers are not shown in person, and their recordings appear as a voiceover accompanying a map of India, Arabic subtitles and Islamic iconography.

The video is produced by Al Qaeda’s usual media arm, the As-Sahab Media Foundation and SITE reported that it had been widely distributed on jihadist online forums.

In it, Zawahiri singles out Assam, Gujarat and Kashmir—Indian regions with large Muslim populations—along with Bangladesh and Myanmar, as territories targeted by the new organization.

India said it had asked security agencies to study the Zawahiri announcement, which experts said appeared to be a reaction to IS’s growing dominance.

“This is just a publicity stunt, it shows their desperation because IS is now showing that they are the real threat in the world right now,” said Ajit Kumar Singh, research fellow at the New Delhi-based Institute of Conflict Management. “It’s a fight for supremacy between Al Qaeda and the IS.”

Kashmir, India’s only Muslim-majority state, has a long history of violence between separatists and security forces. But Kashmiri separatists said Al Qaeda had no role to play in their struggle against Indian rule of the disputed territory.

“They [Al Qaeda] have no scope here. Kashmir is a local political dispute and Al Qaeda has nothing to do with it,” said Ayaz Akbar, spokesman for separatist leader Syed Ali Geelani.

Muslims are a minority in Myanmar, and the stateless Rohingya have complained of persecution by the Buddhist majority. But authorities in Yangon on Thursday told AFP they were unaware of Zawahiri’s call to arms, in a nation that has not seen violence linked to hardline interpretations of Islam.

Myanmar security forces say they have evidence of a resurgence of a Rohingya Solidarity Organization (RSO) group near the border with Bangladesh. But there are no substantiated links to religious extremism, and many experts believe the RSO is long defunct.