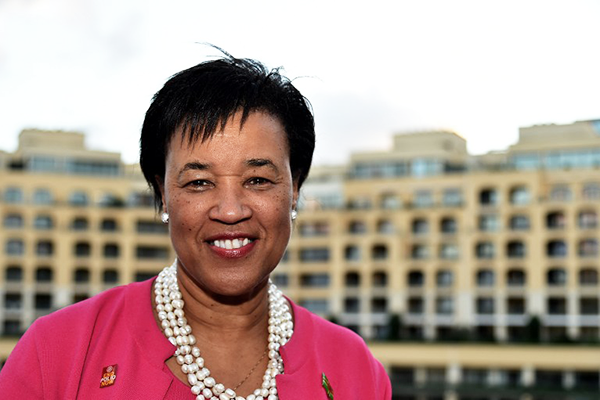 Critics brand the Commonwealth ineffectual, but its incoming chief believes the 53-country organization can use its strength to achieve miracles—such as eradicating domestic violence.

Dominica-born lawyer Patricia Scotland, who was appointed the Commonwealth’s first female secretary-general on Friday, told AFP she would harness the international family’s “huge convening power.” Among her top priorities: “Action to combat any form of abuse against women.”

“One in three women in our world suffer from domestic violence. It’s the greatest cause of morbidity between women and girls,” she said, adding that there was “a lot of work to do.”

“Forced marriage, female genital mutilation, child abduction… these issues affect all of us,” said the 60-year-old, who will take over the reins from Indian diplomat Kamalesh Sharma in April 2016.

Not everyone is convinced the Commonwealth, which includes vastly different countries accounting for around a third of the world’s population, is ready to tackle such issues. A forum on women was included at the summit for the first time this year, but the failure for LGBT rights to get any serious floor time enraged activists—particularly as consensual homosexual activity is still only legal in 13 of the group’s 53 countries, according to the Human Dignity Trust.

The baroness admitted that “there are lots of things we could do better.” But although the organization can never be forced to do anything, because it works by consensus, she insisted it “has never been more relevant than it is right now.”

“There’s so much friction in the world today. We’ve got Boko Haram, we’ve got ISIS, we’ve got terrorism, climate change,” said Scotland, a former attorney general to the British government. “I think most of us are looking for vehicles where we can come together in partnership to try and hone the sort of solutions that the world absolutely needs today,” she said, adding that “if we choose, we could come together and do something quite extraordinary.”

The Commonwealth’s potential can be seen in its work to eradicate polio, she said. Leaders from Britain, Canada, Malta, Nigeria and Pakistan called this weekend for a push to ensure the disease is wiped off the face of the planet by the end of 2016.

“We have a realistic prospect by perhaps next year of eradicating polio from our world,” Scotland said. “It will only be the second time in the history of humanity that we’ve been able to eradicate a disease. If we can do that with polio, we can do that with other things too,” she said.

Born in Dominica to a Dominican mother and an Antiguan father, Scotland moved to Britain at a young age but kept her ties to the Caribbean. She says her heritage makes her a perfect representative for an organization whose members span five different continents. “I am essentially a child of the Commonwealth,” she said, standing on a hotel balcony overlooking the Mediterranean Sea in Malta, where her election was most heartily welcomed by the group’s numerous small island states.

“I am incredibly proud and humbled by the fact that I’ve been chosen to lead this endeavor, this fight in the next four years,” she said, adding that she wanted her mandate to be “a time of partnership and change.”

Of all the challenges facing the 66-year-old grouping, she said the most pressing was finding a way to play a part in the world’s debate over global warming. “Climate change is the big existential threat that is facing us today. Many people like to think that the threat of climate change is for tomorrow, it isn’t,” she said.

And who better to act as a motor for change than the youth of the Commonwealth, where 60 percent of the total populations of member countries is under 30 years old. “We’ve got to galvanize our young people, we’ve got to do something that excites them and makes them realize that the future is theirs,” she said.