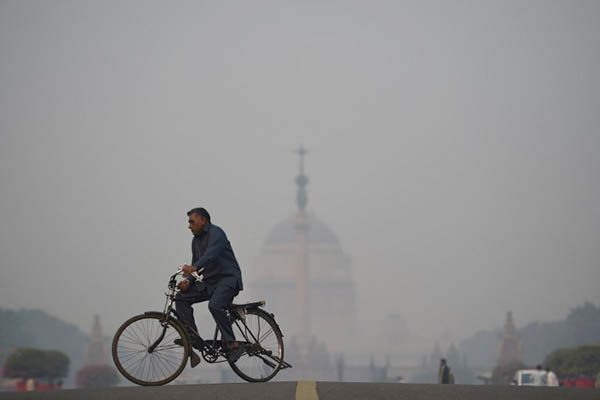 New Delhi declared a public health emergency on Friday and ordered the closure of all schools and a halt to construction activity, as smog levels hit dangerous levels.

A thick, noxious haze of smoke and pollutants has covered the Indian capital in recent days, reportedly due to farmers burning crop residue, vehicular emissions and firecrackers used to celebrate the festival of Diwali. Crop stubble burning is seen as the worst contributor to the pollution, with a government-run monitor claiming it was responsible for around 44 percent of the pollution in the Indian capital.

The Air Quality Index, which measures particulate matter that seeps into people’s lungs and noxious emission in the air, reached 484 on Friday, a level deemed ‘hazardous’ to health. A day later, it had hit 489, the worst so far this year.

Delhi Chief Minister Arvind Kejriwal distributed facemasks on Friday and said in addition to schools being shut down, he would also enforce a plan to restrict the movement of private cars in the city for around two weeks, beginning Nov. 4. Under this plan, odd/even numbered license plates will be allowed on the roads on alternate days to reduce the burden of vehicular emissions.

In a statement, New Delhi’s Environment Pollution Control Authority said a public health emergency had to be declared because the air pollution had hit ‘hazardous’ levels that risked the health of everyone in the city, but especially the elderly and children. As part of its efforts to curb pollutions, it has banned all construction work in Delhi and its neighboring cities until Nov. 5.

India is home to 14 of the 15 most polluted cities in the world, according to the United Nations. One study says that smog kills a million Indians prematurely every year.